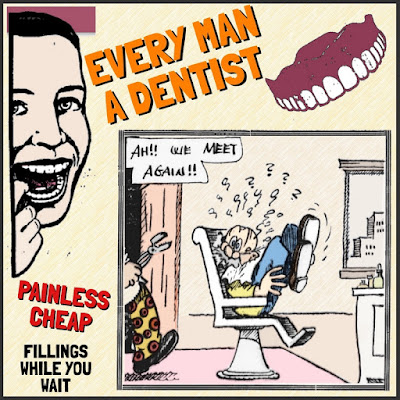 Chapter 11 of 25 -- Head Hunters of the Amazon
Iquitos

Iquitos was a town that sprang up a la western boom towns and flourished as long as commercial possibilities lasted. Up de Graff says when he was there the population was about 3,000. Later it grew to around 20,000. But by the time of writing his book, copyright 1925, Iquitos was again the home of only a handful of natives. A little sociology there, of which I'm neither qualified nor intellectually grounded enough to fully explain. And I've explained some arcane things, like the fauna of various backwater creeks I fell in as a kid, that I wisely summed up as "weeds."

He and Jack Rouse paddled into Iquitos on December 28, 1898. That detail will be on the test, people, Know It! They were "be-whiskered tramps" walking down the street, except they had a lot of rubber for sale and so they weren't hard up. Remember I said something about them picking up rubber here and there? I thought it was basically enough rubber to fill a suitcase, but according to page 28 it was two tons of rubber! With that kind of money they could get cleaned up and find accommodations at a hotel, the Hotel Roma. A room with actual beds! It wasn't a bank of sand, mud, and trees, but it was still nice.

They soon moved from there, only eating at the hotel, and went to "bunk" with a Dr. King, an American. He was an enthusiastic individual and must've been a colorful guy, because Up de Graff's take on him was: "The doctor made Vesuvius look like an iceberg." That's going to be a guy you can glean some interesting information from! Dr. King had tried various money-making enterprises in Iquitos, such as selling patent-medicine. Then he discovered that dental work was more in demand. So he made his own diplomas and certificates and started pulling teeth!

Sometimes Up de Graff puts "Doctor" in quotes, sometimes not. There was one patient who'd been on the point of death for days. He was worn out by fever and the attentions of "Doctors," including Dr. King, and died. His death certificate was a work in creativity, the cause of death being "a congestion of the elementary canal between the gall-bladder and the lungs, causing the cold bile to rise and cake round the heart." A tragic situation, yes, but you gotta admit, no more tooth ache!

Jack and Up de Graff at this point were waiting to book passage back to New York. When they met another American there to explore (Edward Morse), then another guy (Charles Pope), known to the natives as "Ambusha" because he ground his teeth when he slept; "Ambusha" refers to a bird that sings at night. As time went on, Up de Graff and Jack changed their minds about leaving, and now the mission was on to find Inca gold! By the way, Ambusha barely made the expedition, being notoriously known for having an oily manner, shiftiness, obviously a liar, and a student of anarchism and toxicology.

Test: When did Up de Graff and Jack paddle into Iquitos?
Posted by dbkundalini at 6:00 AM