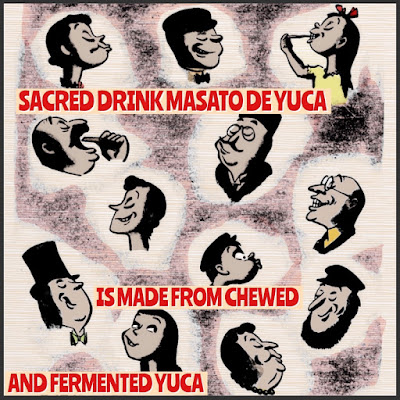 How would you like to be a professional yuca chewer? (Yuca is a particular plant's root.) The way they make the sacred drink masato de yuca (in the book called masata) is actually to chew the yuca in their mouth. I'm not an overly queasy person, but at first that sounds terrible. But I'm guessing once it's chewed and spat out and has fermented the appropriate time, any bacteria is neutralized in the fermentation process. Note: These are my unprofessional, uninformed surmises. If you ever drink masato and find your Uncle Leroy's dentures in the glass, I cannot be held responsible. All information on grandmaslump.com or any of its affiliated companies, of which there are none, is for entertainment purposes only and should not be considered factual. Except for the disclaimer just issued.

Our chapter opens with the explorers waiting for Mejias. At the end of chapter 5 they had met this Columbian trader who carried on a fairly shady trade. They traded with him, then leaving, left their canoe and stores at his post while looking for Indians for the expedition. That came with a three week delay. When they got back to Mejias' place, he was gone. As was their cache of stuff they had left there. But their Indian helpers followed his trail and they caught up to him. They intended to hold Mejias to account at the point of a gun! But once encountered, he ran to the edge of the "open space" area, looking "plumb hostile," so they shot and ... Mejias was dead.

A couple days later they were at another rubber-post, a place established by a Senor Abarca. The talk about Mejias was he'd had an unsavory reputation and that Up de Graff and Jack Rouse had acted in accordance with the Unwritten Law of the Land. For trade, Abarca referred them to another guy two days downstream known as the King of the Napo, named Andrade. His place sounds like our equivalent of a big truck-stop for truckers, an important post in a well-chosen spot at the junction of the two of the most important rivers northwest of Iquitos.

Staying with his family for a couple days, the explorers ate and had their fill, then were treated to some masata. Andrade said, "I can recommend this specially: it has been chewed by my daughters." The daughters blushed in acknowledgement of his compliment.
Posted by dbkundalini at 6:05 AM