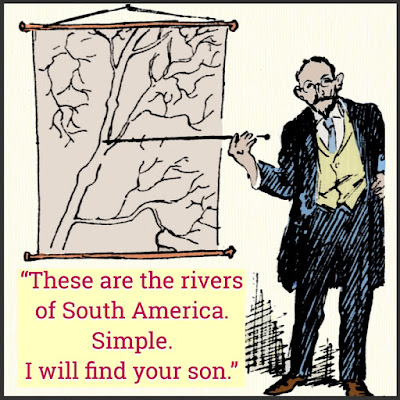 We've reached the end of the trail for "Head Hunters of the Amazon" by F.W. Up de Graff. Chapter 25 is only five pages long. But there's a lot of interesting nuggets in it, 'Where's the Gang Now?' stuff.

It tells us that Up de Graff with Morse took a steamboat from Iquitos to Manaos. Then he had to wait a week or two for an ocean steamer to get there to take him to New York. The delay was nearly the cause of his downfall. Because he met another guy who'd left South Africa shortly after a gold shipment disappeared there. Who proposed that they go in together and hold up the bank in Manaos where he knew a gold shipment was that had arrived from England. The guy went in and out of the bank and pronounced the project "a cinch." But finally gave it up when nobody would help.

The same guy then proposed they go to Venezuela where diamond fields had just been found. Up de Graff actually says they made preparations to jump into canoes, having stowed their provisions, etc., when he got a letter from home saying they really wanted to see him. So he gave up the idea. But before he sailed, he met his old friend William Game, just returned from the head-waters of the Jurua, suffering with "berri-berri." I looked it up: "Thiamine deficiency," usually caused by poor diet or alcoholism.

Game had news of Jack Rouse, who'd gone with Game on a rubber expedition with a few Indians. The Indians robbed them of their canoe and deserted. Game and Rouse were soon out of rations. They lived a few weeks, then got berri-berri, which Rouse died of. Game didn't have the strength to get Jack's body out of there, so he climbed on a balsa log and floated down to the first plantation, and after that took a boat to Manaos. Up de Graff never saw him after that, but later heard he was off to the Klondike.

Flash forward approximately 15 years, "not many years before the World War," Morse was standing in the entrance of a New York hotel and saw a guy with a white-bellied spider monkey (maquisapa), doing an organ-grinder gig and passing the hat. That turned out to be Ambusha (Charles Pope)! Who promised to meet Morse later that night, but he never returned.

Back to Up de Graff waiting for the steamboat, still in South America, he went ashore and met a man at the United States Counsul, Mr. K.K. Kenneday, who collapsed when he told him he was F.W. Up de Graff. Kenneday had been looking for him for years, with mail for him piling up in his office all that time. They figured he was dead.

Sailing away, Up de Graff reflected on his whole journey, then arrived in New York on Nov. 18, 1901, seven years to the day since he sailed for South America.

Guess I'll say a few things about myself. I discovered this book in the 1970s. I had it at the place where I worked and we looked at it, found little passages and laughed about them. We enjoyed a little bit of the adventure but thought everything was funny. I had a similar book of exploration with a picture in it of a guy being carried on a bed by natives. I thought that was this book, but it's not. Then my copy of "Head Hunters" was somehow lost in a series of moves.

Then a few years later I found another copy at a book sale, also now decades past. I've recently again gotten rid of a bunch of books when I moved, but kept this one, still intending to read it but never getting it done. Summarizing it as I have now, of course I had to read huge bits of it, get the gist of the chapters, etc., but as for actually reading it word for word, I still haven't done it. And knowing me, I probably never will.

But a few years from now I will have made my way to New York. I will have a white-bellied spider monkey, doing an organ-grinder gig. My copy of "Head Hunters of the Amazon" will be with my stuff. A guy who read my series all the way through -- and thought it was fascinating enough that he was prompted to rob steamers in South America of bank shipments -- will walk up and say, "Aren't you the guy from the internet, Grandma Slump, who wrote about this book?" I'll have the immediate impulse to deny it three times, the monkey will kiss me on the cheek, the Lord will suddenly appear, very disappointed in me, but I'll die and go to heaven anyway, because Once Saved, Always Saved.

Amen?
Posted by dbkundalini at 6:00 AM