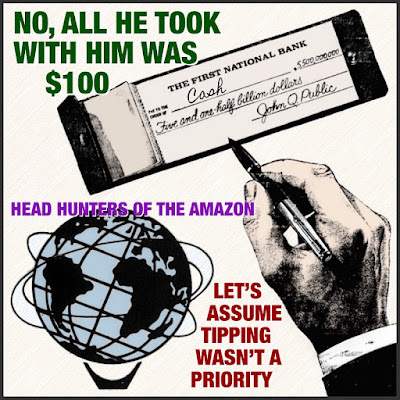 Fritz W. Up de Graff in the U.S. (1890s) had a frat brother from South America, D. Enrique Domingo Cordovez, called the Count. They talked about the backwardness of his country Ecuador, which fired in Up de Graff a determination to go help make some modern improvements. Maybe street lights, shoes on horses, and eventually cars and the internet. Lots of big dreams.

But he and his team first had to deal with other exploration and discovery, finding their way around forests where in just a few minutes you could be lost forever in a swamp or bog. It’s no small undertaking to avoid the undertaker there unless you were swallowed whole by an alligator or burned at the stake in one of the worst pagan rituals. The darkness lit only by wild flames, discouraging war cries, the sharpness of handmade spears, and a total absence of law enforcement added to the generally bleak outlook.

Personally, I don’t know what I’d do with gold if I found it. I'm sure no one would really respect my rights when I registered my find: “I claim the gold of South America, having found the main vein at such and such coordinates, in my neighbor's backyard.” 20 minutes later I’d be overrun with guys with pick axes and guns aimed in violent intent at one another and me. It’s the kind of thing -- finding gold -- you should never tell another person, including friends, who’d step over you in a second in their lust and crazed abandon. It'd be better to find cotton candy.

Anyway, Cordovez tamped down some of Up de Graff's hopes, assuring him that there was indeed the possibility of making “a handsome capital,” just fabulous fortunes, which were already ripe to be had with various enterprises in America. But in 1894 to an adventurous spirit, “a handsome capital" was good enough. So off he sailed in 1894 with only $100 in his pocket, hoping for great adventure. He was there for seven years without so much as a day off.
Posted by dbkundalini at 6:00 AM