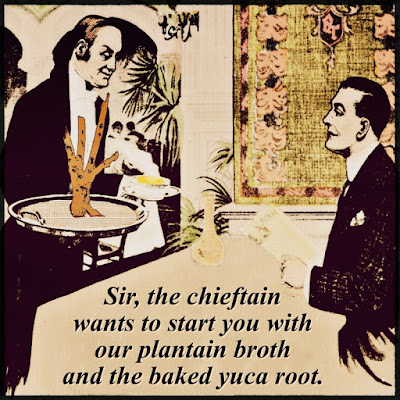 Chapter 16 of 25 -- Head Hunters of the Amazon
Diplomacy

Seeing a Jivaro hut on the hillside was a lifesaver for Up de Graff and Game. They felt new strength and their fear was gone. They didn't even think of the possible difficulties in their path. And being indifferent to the effect it might have on the Jivaro, they let out a yell of joy. They should've thought over what that might mean to the Jivaro; was it some kind of war cry? Because that was the effect it had. We used to have a war cry as kids, which was "Yee haw! Maw caw! Booby booby booby!" The "booby" triad was accompanied by repeatedly patting our stomach. How that'd fly in South America, I'd probably be dead.

The Jivaro burst into war-whooping and howling. The idea being to impress whatever foe was out there that they had huge numbers. For three long hours they kept up the yelling, but the intensity varied. Up de Graff broke the spell by leaving his rifle behind and walking slowly up the path. Three scared youths came out for a parley.  He did hand motions like paddling a canoe and they finally followed him. In the canoe the explorers had some trade-goods, including poison in a bamboo cane. There's no mention of warning labels, so we just hope they didn't get it mixed up in the pantry.

These were gifts, and that settled everyone down. From their tribe the natives brought a gourd full of drink called giamanchi, and it ended up being a lot. The Jivaro were quite open by now and the ice broken. But they still couldn't converse, so they tried sign language. The tribe ended up sending a special envoy to the Chief (named Lazaro), and they waited for him. Which only took about an hour.

Of course Lazaro was very interested in what the explorers were up to. They told him they were looking for gold and about their current camp. They accepted an invitation to stay with the tribe. But they still thought they should stay on a small island nearby. The concern had to do with the great health of the Jivaro and the comparatively poor condition of Game. He had old scars from having scratched sand-fly and mosquito bites. And many of them were reopened and resembled a nasty rash. The Jivaro saw it and practically stampeded, but they were fearing smallpox. Running sores are terrible and that's not a running joke.

Up de Graff persuaded the chief that Game didn't have smallpox. Next the Jivaro provided some hospitality. Their medicine man paddled them toward the small island. Once there, they set up a house, started a fire, etc. In an hour they had a decent shelter and fire, plus supper of roast yuca, roast corn on the cob, roast plantains, with peanuts and wild honest for dessert. My graphic makes it look like an upscale restaurant, but I'm just exaggerating, which might've been a mistake, since I started laughing to the point of tears, slapping my knee, and ended up choking on a piece of my own dinner, chicken. I could've used the chief to step me through the Heimlich maneuver. And a house built in an hour would've been nice.

The explorers rested, nursed their feet, ate, and chatted, passing four days on the island. The chief then proposed that he should accompany them through the Pongo. His motive, a great one, was to get the other presents. But it was greater news for Up de Graff and Game, because it meant good help by real river experts.
Posted by dbkundalini at 6:00 AM