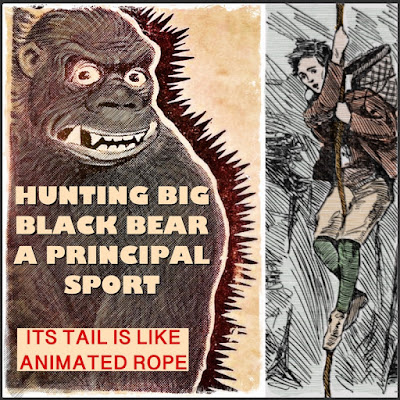 Andrade told the Yumboa, a tribe of Indians, the easiest way to get to the mouth of the Yasuni River. But they were very shy about entering a place of ill repute and didn't want to go. Little by little, though, they were persuaded to accompany the expedition. So off they went, 'Yasuni River, Here We Come!' The name Yasuni means long river. It's also sluggish and deep, covered with deep verdure in places, so you feel like you're right in the heart of the forest.

Once there, the Indians enjoyed excellent hunting, getting lots of monkeys from at least 13 different species. Up de Graff even started a collection of monkey skulls that he pulled from the pot as they cooked. Wild turkeys were also numerous and tapirs were seen daily, so there was no shortage of good meat. There was also a lot of fish, including piranha. One was hooked and fell to the bottom of the boat, where thrashing around it made a wound like a miniature shark on Jack's feet. I can imagine the screaming and thrashing around if, say, the boat had tipped over, the churning of the water. Then total quiet except for some last sad gurgling. Fortunately, that didn't happen.

Among the wildlife was also the anaconda, the largest snake in the world. They can grow up to 50 feet. While bathing one morning, Up de Graff felt something heave under him, which turned out to be an anaconda about 30 feet long. They killed it with a shot that cut it in two, near the head, then dragged it ashore. I myself saw a snake about that big in a missionary meeting when I was a kid. The strangest thing I ever saw in church, except for some of the ladies' hair.

On they went, day by day, deeper into the Unknown. One of their principal sports was hunting the masquisapa, the largest monkey, jet-black with white markings on its face and head, and a long prehensile tail like animated rope with five ends. These are good sport because you can never get a still shot. But the Indians are better at hunting them with various skills they've developed over time. 'Sit still, you big lummox, so I can get a decent shot!' Very uncooperative.

After a while the idea occurred to them to strike inland and build a permanent camp for the area. They left the boat bottom up and followed a long hunting trail. It was so far they were 18 hours from the canoe! They built two shelters, one for Jack and Up de Graff and the other for the Yumbos. But they got a fairly rude awakening in the morning, when they discovered the Yumbos had abandoned them!

It might be fitting to roll the slow motion collage of their time with the Yumbos, with a cloying instrumental of "The Way We Were." The caption at the bottom about them meeting is: "At first they seemed very shy of entering the place of evil repute." Hold it, stop the film. Yes, little by little, they persuaded them, extra pay, a promise of return if there was anything bad awaiting them, etc. And "finally" they consented to go! All page 65. Now a scant 10 pages later they've abandoned them. My verdict around 130 years later, you should've seen it coming.
Posted by dbkundalini at 6:00 AM