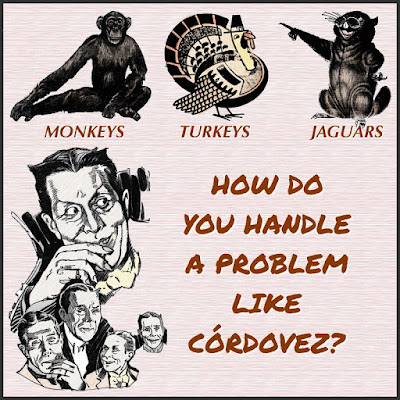 Recall, Up de Graff went to Ecuador on the invitation of a friend from college days and fraternity. Being a guy who loved outdoor living, Up de Graff went hunting. This wasn’t just squirrels or rabbits like I used to hunt, but monkeys, turkeys, wild pigs, parrots, deer and jaguars. He remembered how hunting monkeys (baboons) really excited his enthusiasm. But it was the taste of them that stood out so clearly in his memory, saying, “The gastronomical possibilities of a baboon probably occur to only a very few of the millions who gaze at him through iron bars.” I'm not able to disagree.

Beyond that, he met the rest of the Cordovez family, including a brother most famous for the picturesque cursing of the peons. Which, though I disapprove, it'd still be nice to have a sample, maybe extending to a minute. “You worthless shiftless son of a bitch, I’m cutting you off from rum at the fiesta! You can die of thirst for all I care!”

But it was the father of the clan whom Up de Graff ranked the most egregiously worst of the bunch, and this goes along with modern sensibilities of fairness, honesty, and respect. Meaning, I may as well brag, I am personally more refined than the average Cordovez (of that particular group, now dead). Few of us are as wealthy as they were, but their riches seem to have been amassed in large part via hook or crook.

I’ll try to tamp down my righteous anger and stick the bottle of vitriol back in the cupboard and remain as dispassionate as a person of my sensitive sensibilities can reasonably be expected to muster or attain.

Further, Up de Graff says the Cordovez menage at Riobamba included, in addition to the terrible old man himself and his sons, his wife who kept house. The old man was generally unkempt, having little use for soap and seldom changing his clothes. But my qualms with the old man — it’s something of a simmering rage, threatening to boil over any minute — has to do with his abominable treatment of others. Which Up de Graff also had a hand in, to the extent he could stand it, when he finally quit.

Old Man Cordovez sent him to Salinas. Which is an interesting place for its elevation and views all around. North of there are mountains that rise over 22,000 feet above sea level. Making the average everyday mountain look like a pimple. On a good day, when the sun’s just right, other mountains have to pack it in in frustration.

The main sins of the Cordovez family and the old man in particular have to do with him not paying his workers, and additionally always scheming to keep them in servitude by being indebted to him. I thought I had a bad boss or two, but this guy was scheming people into perpetual slavery. And I have a hard time overlooking that, no matter how pretty the mountains are.
Posted by dbkundalini at 5:34 AM