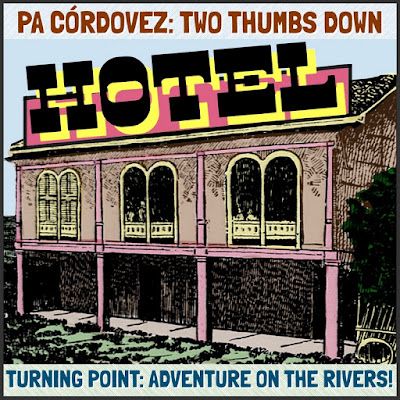 Chapter 3 of 25 -- Head Hunters of the Amazon
Exodus

Our chapter opens with F.W. Up de Graff still working at Salinas for the Cordovez family. There had been a revolution and its head was Alfaro, who became President. Some of the folks were completely opposed to Alfaro, but once the jig was up they changed their clothes and marched in support of him. Gotta stay on the good side of power... In terms of democracy, though, this might mean there's only half as many people as we think we see!

When the revolution kicked into gear, Up de Graff happened to be there (in Guaranda) on business and took in some of the action. Then headed back to the Cordovez estate. A few days later a party of 20 officers show up to arrest him. But he'd had some warning, so he showed up at the front door with a gun. They wisely handed him the warrant and left.

Skip this, skip that, he finally left the Cordovez place for good, no longer entirely welcome, and was staying in a "hotel" (his quotes) in Riobamba, which was a worse dwelling-place than he had on the estate. He wondered, What shall I do, what shall I do? Then took a horse-drawn stagecoach to Quito, where he ended up meeting with President Alfaro and getting a passport for other travel in South America.

At the end of this chapter he shares a letter he wrote to his mom, telling her that "tomorrow" (Jan. 10, 1897) he'd be leaving on foot on an expedition toward the Napo forest, about 600 miles away, with some Indians employed to carry his equipment. He expected to camp on the Napo River, build some canoes, and start on a 4000 mile trip. I like this part: "I take absolutely no money with me," except what he'd need years later to get back to New York. The rest of his cash he invested in machetes, and beads and trinkets for trading with the Indians.

He finishes the letter with basically, 'Don't write back,' because there'd be no way he'd get the letter. And that was it, he was off!

That'd take a lot of bravery. One, I'd hate to be involved with a bunch of (probably) crooked cutthroat politicians in the midst of a revolution. I'd barely survive peacetime there. It's always better to fly a little more under the radar, which hadn't yet been invented. Still, Up de Graff lives a fairly humble life in his journeys henceforth, off to see the headhunters and escaping the powers that be (Alfaro, Cordovez, revolutionaries) who might've also had his head.

I'm trying to process his thinking process. Which must come down to this, get out there, go for all the gusto, if you live or if you die, it'd be worth it for the sheer adventure. And, importantly, for the riches of gold he expected to find. I'd probably be much more skeptical about the gold. Even if you found all of it you'd ever want, the idea that you'd get out of there with it is farfetched. The place is crawling with cutthroats. You really think you're going to be boarding the boat later, declaring your only possessions, a hat, machete, and three tons of gold? Don't think so!

But the adventure of it would be great, gold or no gold.
Posted by dbkundalini at 6:00 AM