Cogs In A Machine 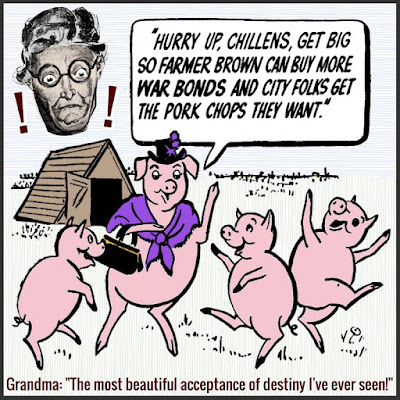 Knowing Your Destiny
Part 25 of 30

We’ve all had it explained to us from time to time -- at least once by a boss, which is unforgettable -- that you're nothing more than a cog in a machine, and that you have one function in life, to be all that that cog needs to be. The other cogs are depending on you. And the boss, the guy telling you the philosophy, is the judge and regulator of the cogs, that each shall do his or her indispensable part until it’s time to be replaced. Which can happen at any point if you ask for more than he can give, like a day off, when there's always work to be done.

So whatever your choice, you’re basically screwed. Think about cogs. They never ask for a day off. But for you, if you fail to show up, you have the short-term value of a day off, but naturally a different cog will be in your place if you’re dumb enough to show up again. If you do show up, though, it’s almost as embarrassing. You’ve accepted that your life is nothing but a cog in this guy’s machine, and he’ll be there to push you around with threats and devious laughter until they swat you with the Silver Paddle on your last day before retirement.

The best course of action would be this: Secretly arrange a new job somewhere else, get it in writing, if possible in blood, but keep the starting date secret for a while. You want it to be a time when you are entirely indispensable to the cog boss. Then you hit him up for a day off. His legs start twitching like they do, knowing that he’s giddy to give you the whole spiel again -- having you over the barrel -- so you let him go point by point over the recitation, occasionally asking him to amplify on particular points.

The big difference this time is you’re yawning, stretching your arms, practically dozing off with indifference. He’s starting to get nervous because you aren't sweating blood like usual. To make this story shorter, you tell him you have this other job where absences are endless, expectations are low. And that you’re unruffled by anything to the point that you’re capable even now of whipping it out and drenching the place. “It’ll be something to remember me by.”

Mother Pig carries something of that message for her chillens. “Get bigger so you can be pork chops for people to eat.” Even Grandma’s aghast at this fate, while we actually endorse it every time mealtime rolls around. A pack of bacon or what have you. The glad acceptance of destiny for pigs comes from their ignorance that anything bad’s going to happen to them. And what if they somehow knew, they wouldn’t be here in the first place, since without pork chops nobody’d be breeding them. Mother and Father Pig would sit in separate pens till their lives were ended for some other reason.

So I guess there’s one destiny for us and one for pigs. Pigs get what they get. We think it through and try to keep ourselves free and clear so that we can be happy, whether we’re absent a lot or whether we’re willing to die at a job that's willing to kill us for a buck.
Posted by dbkundalini at 6:00 AM