Bring In The Angels 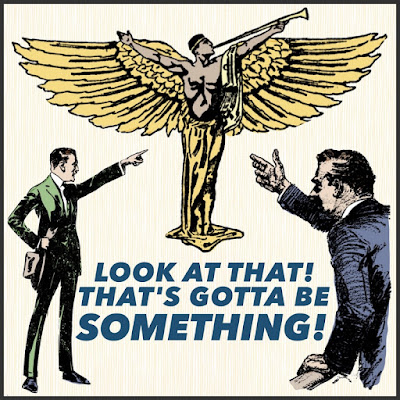 Knowing Your Destiny
Part 30 of 30

Throughout these inspirational talks, we’ve looked at the full extent of Destiny’s dealings. There’s a lot of good "goin' on." But whenever we look at either the micro level or macro level we see more turmoil, a more unfortunate picture than we’re comfortable with. And, like most things, we judge all this by its impact on us as the human race, how it might do us some good (as we judge) or harm (objective truth).

You know what my way is, to lull everyone into a state of acceptance, with a strong push toward the positive and optimistic, knowing that that’s what we want to hear. Yes, we recognize that fate and destiny are somehow tied in together -- as I saw earlier just today with another funeral procession on the interstate, always a jarring sight. The whole thing makes me wonder what happened to the old gravel roads and the dignity of the funerals of old. Surely the undertaker could take the side streets just to maintain some last shred of decency. Could it be we're in that big a rush to get to the grave? Food for thought, at least for the worms that presumably have a long-enough attention-span.

I myself don’t want anyone’s destiny to be bad, always in the gutter, or as rotten as they come. But it’s not up to me to judge. As varied as the things are that happen at the individual level, it’s still my optimistic expectation that the ultimate destiny out there for all of us is fundamentally good. Let’s say it’s a matter of a huge dark planet encroaching on the earth, moving in like the new kid on the block, who is also the cosmos' worst juvenile delinquent, we could be snuffed out in a second. That would be bad.

But what if it is -- at least in a psychological sense -- much as you hear it in religion, that there’s a macro level in our nature, however it may have evolved -- it’d have to be transpersonal -- whereby when we’re about to be wiped out we are engaged in at least one last trance, similar to the moment we personally fall asleep, and it is good? None of us are destined to wake up, let’s throw that in for the natural argument of the situation, but if we don’t know any difference, if the world becomes infested with aliens, with gigantic fangs and a persistent insatiable appetite, what are they going to do when they run out of food? They would have to eat themselves (or go vegan) and any aliens as badass as I've been imagining them, they won't be patient enough to make such a radical switch.

Just before this, then, angels or visions of angels within, will have delivered us, the greatest Destiny reserved like a fire extinguisher behind a pane of glass that somehow vandals didn’t dick with. The system worked! So the rest of us are gone, delivered, happy to flit endlessly in the great beyond! Can you hear my wings? “Flit, flit, flit.” With the angels.

Now here’s the secret destiny that no one expected. Somewhere there’s a number of people, newborns overlooked in a tiny village in Africa. Apes have nurtured them, they come of age, they start the new language, etc. And they’re very holistically oriented, environmentalism is their nature, with the foresight to build space shields against an unperceived alien enemy. And they guard and nurture their destiny. Finally, a little kid is born, basically the correlate of me, also with a destiny-counseling gig, but this kid is able to make greater inroads than I could ever manage, since the whole population is now just that little cluster. And so forth, and so on, you'd have to agree a very happy ending to an otherwise tragic set of circumstances.

Final note: One of the things people like about me is I'll move heaven and earth for a happy ending.
Posted by dbkundalini at 6:00 AM