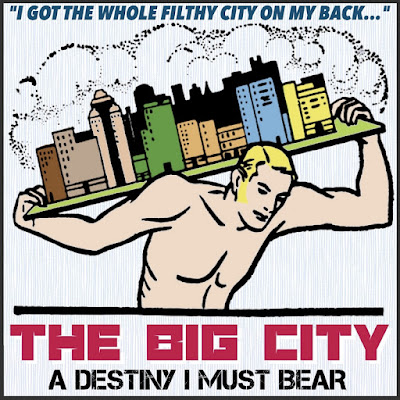 Knowing Your Destiny
Part 21 of 30

I live in The Big City. Actually I'm a small-town guy by upbringing, used to the peace and quiet, relatively uneventful days and nights, an occasional fight on the school playground, and for real excitement the repainting of the water tower every 10 years, silver like always.

Here in the Big City -- and I’m not complaining because it’s all fascinating -- if there’s a half hour goes by without hearing a siren, you know it’s daytime. After dark, and you might have to listen very closely (but not usually), you’ll hear sirens. And sometimes gun shots, although to be honest you don’t really know if that’s what it was. Usually that bam-bam-bam-bam, four shots in succession, can’t be just innocent pounding, a guy trying to reseal a paint can. The weird thing is the gunshots aren’t necessarily followed by sirens, in fact seldom are. It always makes me wonder.

For all that, and all the other noise, I never complain about it, because it wouldn’t do a bit of good. It is what it is. If I were so concerned about it, I didn’t have to come here. But you probably know the story, Grandma’s house became so rundown; it got the creeping crud. Which they say broke forth in multiple infestations (that’s the town’s charge, which I dispute); I say it could’ve been chemically treated. But I was unceremoniously evicted, they loaded up the whole precious place in pieces and hauled it to the dump, and at my expense (!), and I haven’t heard from it since. Fortunately, both my grandparents are dead, because otherwise this would’ve killed them.

So now I consider this particular placehome. The city fathers back in my old town can kiss my --- no, I won’t be vulgar or resentful. They no doubt had it right, and certainly they are called to lead the community in the way they think is right. One thing kind of rankles me, though, they’re very selective on the parts of town that need to be condemned and hauled to the dump, but the other parts -- where they live, so convenient! -- get the extra boost, the grants, the Save Our City drives, etc.

Here in the Big City, then, I’ve seen plenty of places not as good as our old house and there they set … rotting away forever. Windows missing, roofs ripped off, sides falling in, warning signs everywhere, the outsides spray painted with dirty words (along with cautions, “Do Not Enter,” etc.) The whole place is a mess, right down to the garbage that the prior residents never bothered to set out for the weekly collection but the squatters have been nice enough to cast far and wide on the premises and even in the street.

Yes, I’m a proud citizen of the Big City, with its destiny my destiny. And so I say proudly, my voice quivering more than slightly with my words, “Send help! I’m dying here! If I go away for even a week, there will be squatters in my bedroom!” Don’t let that be my destiny!

NOTE: I'm thinking about focusing on the Big City in February. I have enough observations, including bitter complaints, about the Big City, that it'll take most of a short month to get it out of my system.
Posted by dbkundalini at 6:00 AM