The Diary of Destiny 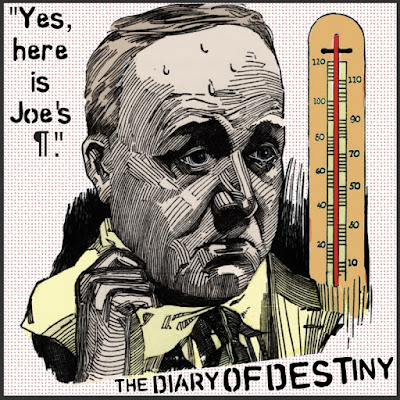 Knowing Your Destiny
Part 6 of 30

Cue the eerie music, an accusatory drone. Our man of destiny, Joe Mattuck, knows in an instant the hottest spotlight shines on him, a guilty man so very used to the shadows. He’s heard of spotlights, like everyone, but it’s not until you stand in the full beam that you know how utterly stark it is, especially at this close proximity. The heat, so very toasty, unpleasantly so, compounds the intensity with his own burning guilt. "Why'd I steal that doughnut when I was 5?"

The voice of Destiny then, in every way a menacing, all-knowing presence, speaks from somewhere, as though the voice of every man's conscience. It calls him by name and Joe feels himself getting hot, very hot under the collar, with the first signs of a sweaty downpour beading-up on his forehead, becoming within seconds a literal spillway of self-incrimination and guilt. Joe thinks, "I'll be sloshing my way out of here, if I don't drown first."

It's always the same on Destiny's arrival, offering its calling card and standing on ceremony. There's no preliminaries, no warm-up act, no pussyfooting around, no perfunctory Miranda rights, no excuses of mistaken identity, no DNA check. It doesn’t matter if you’ve burnt off your fingerprints with acid, or if you’ve somehow fooled Santa Claus, or if Father Murphy’s carried you on his back, or if you’ve been knighted a saint of the Church. If you’re guilty, Destiny knows. And closes in on you, as close as your own swampy breath, your confused DNA, and your throbbing boom-chicka heartbeat, which becomes progressively, steadily louder, thump, thump, thump, boom-chicka until the querying porch lights of neighboring homes as far as 10 miles away twinkle on and off in wonderment, a kind of hush all over the world.

Only then does Destiny speak, its voice disembodied, an ethereal patient monotone, completely under control and persistent, knowing you're cornered with nowhere to run, nowhere to hide. Every hiding place, down to the minute space between the wallpaper and the wall, is closed to you. Destiny speaks your name again -- "Joe Mattuck." Maybe the FBI couldn’t find you, the CIA, the KGB, insurance salesmen, junk calls. Even mosquitoes on hot summer nights wondered where the hell you went. Your own sweat didn’t know where to look, pooling up in vain near a neighbor’s basement door, in a desperate struggle to find donor pores in which to maintain its survival.

“Joe Mattuck,” Destiny says. Again, there’s no rush, it drones on, recounting from its own enormous Diary of your life, your great guilt. (cf. Diary of Destiny, Vol. 894, page 1249ff.) It’s a horrible recounting and you remember every lascivious moment right down to that supposedly cleansing ritual of you and the guys burning their underwear on that camping trip when you were 12. And telling one another, “We’re free and clear, guys, the evidence is gone!”

Remember, Destiny plays no favorites. It could happen to you!

------
Based on the old radio drama “Diary of Fate.” Its 25 episodes are available free online.
Posted by dbkundalini at 6:00 AM