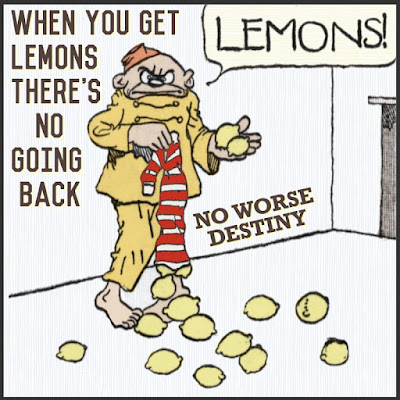 Knowing Your Destiny
Part 9 of 30

We know it’s proverbial, sometimes life gives you lemons. Which, unless you successfully make lemonade for a living -- I tried it as a kid and made about a dollar -- you're better off going into apples. The proverb about lemons refers to their sour side and your destiny. You take a big suck off a lemon and the first thing you’ll do, your lips and mouth collapsing on themselves, is pucker up. Your brain knows it's coming, but when those sour drops meet a mouth in equilibrium, they're not disturbed by the brain. Your whole system responds to the lemons with an attitude of “That’s nasty!”

Someone told me a long time ago that if you get too much lemon juice in your mouth -- the straight stuff -- it can badly affect your teeth, as in messing up the enamel, and I guess that makes them more prone to decay. Fortunately we didn’t get too many lemons when we were kids, because I couldn’t have taken it. My teeth are already fairly bad, and so for anything involving lemons I'd need a bunch of toothbrushes. More often I avoid lemons, actually whenever possible, and even lemon drop candy isn’t that great.

If we're talking about generally negative life events and not literal lemons, that could be your destiny. It's one sour thing after another. And you're spinning your wheels, desperately trying to make "lemonade." But what for? Certainly not to drink yourself. But to put your skills to work, whatever negative bent they've taken, to make the most of your life, even if to now it's a negative output. It's done all the time. But if this is really what you choose to do, I'm not too sure I'd want to know you. It's sort of like, saying, "Yeah, they're bad for me, but that doesn't keep me from making a profit off the suffering and misery of others. Maybe I can find a bunch of desperate guys downtown, get them hooked on lemonade, make a great profit, and if their teeth fall out, that's their problem."

Of course business works that way all the time. "Buyer beware, anything for a buck, it's their funeral." To a certain extent we know it's wrong, but there's very little regulation (as far as I know) involving lemons. Kind of weird. If you made airplanes that were guaranteed to crash, we wouldn't stand for a policy of "Buyer beware." Too much danger for the common good, clearly, whereas if you immediately lose the enamel off your teeth and have to gum bread for the rest of your life, that's something the overall system doesn't care about. I personally hate exploitation like that, but like I said, I tried to sell lemonade as a kid, so I'm just as guilty. Except I was unsuccessful, saw the error of my ways and repented, and immediately closed up shop until heroin became popular.

It's true that I favor certain restrictions on behalf of personal welfare -- I'm mentally half-nanny -- but naturally you can't save everyone forever. Maybe it's their destiny to be served lemons, lemons, lemons everyday, all the time. Lemon-flavored bread, cheesecake, steak sauce, everything you can think of right down to the lowly lemon-flavored turkey drumstick. All those people have to make a living too, and they don't know one mouth from another. You have the bad teeth, you have to make your own choices.
Posted by dbkundalini at 6:00 AM