His Eyes Set On Destiny 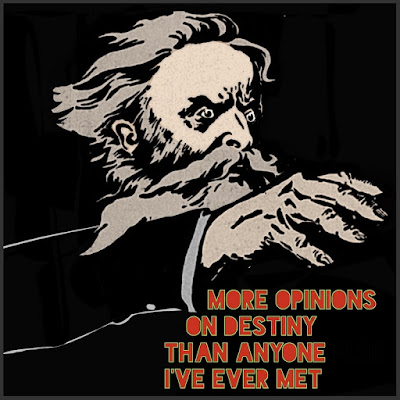 Knowing Your Destiny
Part 12 of 30

In my travels 'round The Big City, I've several times had the opportunity to engage in conversations with others. I met this guy, anyway, and in few days I hope to say a few things about a local monk who also turned me on to some really deep jive on Destiny. Both guys -- even though they’re both guys from around here -- could not have been more different. This guy was distinctive for the piercing fire in his eyes; he definitely doesn't have the gene for lazy eye. He was also distinctive for the force behind his opinions.

No doubt he would object to calling anything he said mere “opinion,” since he lives only by Truth and Truth alone. I kind of doubt his outlook and yet at the same time envy him. How great it must feel to be so certain of everything, not just your own destiny but the destiny of the whole world, the whole cosmos, the whole kit and caboodle and Tyler too! Like a guy I once met hitchhiking as a kid who said people in Texas only drive two speeds, zero and 150 mph. It sounds impossible but he was so certain of it I still can't possibly doubt him.

Anyway, let's get to it, here are some of the pithy (yet deep and forceful) teachings passed on to me by my John Brown-like acquaintance. I’d like to just note one more thing about the guy, his burning eyes. We were at DQ, me trying to eat a hot fudge sundae while agreeing more or less with everything he said, and him basically doing brain surgery on me with his piercing eyes -- it was endless and uncomfortable -- staring into my eyes with a rare heat, literally melting my sundae and making me uncomfortable in other ways too. The neck of my shirt mysteriously squeezed me till my eyes bugged out. I was kind of mad about the melted sundae. But still managed to drink it in a couple gulps.

HIS TEACHINGS:
-- Nothing is ever what it seems. The truth you think is the truth isn’t. The truth you can’t handle.
-- There’s a force bigger than anything imaginable always forever pulling all the strings.
-- Only he and a few trusted others -- “the elders” -- know what it’s all about.
-- You should do a virus scan on all email.
-- Never get your shots.
-- Up is down and down up and both are conspiracies.
-- Potty-training makes boys effeminate.
-- Dishpan hands is a media hoax invented to pay for soap operas.
-- It’s reasonably tough to distinguish Shit and Shinola. Most people can’t. (I had him here, since I recently studied Shinola.)

He had a few other extraneous points but these made up his basic doctrine, what he’s pinning his whole destiny on. In a way, yes, he definitely has it going on. I wish I could be more like him. The certainty would be great. Then the burning eyes, the judgmental fervor, so much like the typical Episcopal priest it’s uncanny, with his divine ability to see through to the very core of all things, definitely a street corner prophet if ever I've seen one, with utter trust in existence and only one fear, hellfire for everyone else.
Posted by dbkundalini at 6:00 AM