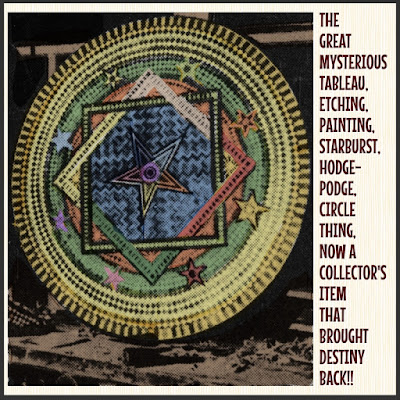 Knowing Your Destiny
Part 28 of 30

Nothing says "Destiny" like the time humanity's destiny was so far askew that they said there was a rip in the fabric of existence. I remember hearing about it and thinking, "Whoa!" My entire family was taken aback and changed. Mom refused to cook and Dad refused to eat. We kids didn't know what to think. The neighbors came over to cannibalize us and we turned the tables and cannibalized them. It was a wild time. Despite our good upbringing, we ran roughshod over the town, pillaging and burning, Destiny askew as our excuse.

Later I came to understand and regret what had happened. Leading scientists said there indeed was a rip in the fabric, and left it at that, not sure what to do. But one thing became crystal clear to me, that cannibalism should be strictly curtailed, and that we wanted neighbors with good taste, not neighbors that taste good, which they didn't.

It’s times like these -- thankfully few and far between -- that you're most grateful for people who know what they’re doing. And there were some deeply wise souls. They went into a kind of soothing anthem that made us drift off and sleep for 10 years. We woke up as adults with a whole new perspective on things. All this was done with a  purpose, forces acting to keep existence on the right track. A kind of murmuring call went out from the heart of nature and we congregated in twos and threes all over the globe. It was thought up by Tibetan monks, who are quite modest, but, believe me, when we’re together they don’t want anyone to forget it was them that conjured up the saving hocus pocus.

They descended on our little town thanks in part to my family. One of my grandpas, going back a mere 50 generations, was himself 1/20th the illegitimate son of a Tibetan monk, the original offender having been translated into heaven before we caught his name. Grandpa’s powers mostly involved fishing, which was completely supernatural, but when the chips were really down, and mankind was cornered against a barrier no man could cross, Grandpa went out to the outhouse and blew off enough steam that the various portals of time were mystically adjusted, etc. Sounds impressive but it stunk.

That’s the old generation, and now we’re up to the new. And with Destiny going askew, that brought forth the monks and those with monk-blood chanting and quizzing one another days on end. This work ongoing, a kind of rough sludge gathered at their feet. The chanting continued, the sludge was everywhere. I had a pair of Hush Puppies ruined by it.

A week later, then, they realized all the pipes were backed up. The head master said it didn’t smell right, and he called them to buckle down on the chanting, faster, louder, in various languages known and unknown -- looking for every force in the universe that was good. Thankfully it all fell into place, rays of light from above blessed a particular artist, who came up with this mathematically perfect artwork. Unleashing it on the sludge, the sludge found its limits and retreated. Rays of light sped around the world in a cleansing work.

Of course then, the artwork being widely promoted, it was released on T-shirts, that, even though a capitalistic thing that seemed cynical at the time, was precisely what the monks hoped for. Because a  mystical haze descended on us from the symbol widely distributed. The sludge went away and now it’s so far gone I can’t even remember what it looked like, just mushy. Destiny was fully restored, back on track, and everything since has continued apace as desired. Even wars that were interrupted by the sludge resumed -- as they should have -- since life is more than cotton candy and party favors.

As for myself, I completely lack all temptation toward cannibalism and cheating on homework.
Posted by dbkundalini at 6:00 AM