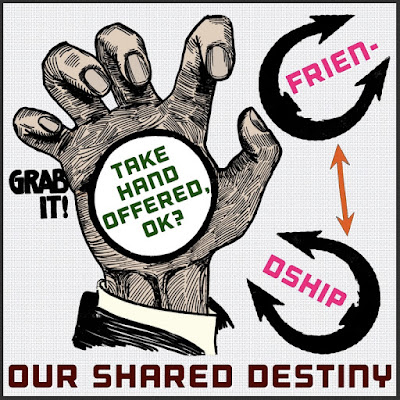 Knowing Your Destiny
Part 26 of 30

I graciously reach out my hand that we may join together, recognizing and honoring our shared destiny. If such is what you also choose. Being such a kindhearted soul -- that’s what people say about me, agree or not -- I’m always thinking, scheming, dreaming, imagining, plotting what we could do in this world if we were on the same page. The way it goes in my daydreams, brotherhood and sisterhood break forth like a beacon, with a clarion call to mutuality and camaraderie, love for one another, free grass, public bathing, nudity run rampant (but nice), and goodness. Like Woodstock, but listening to our own music on earbuds.

But it doesn’t matter to me if you’re old, young, or any of the other species of age. As part of my push to celebrate our shared destiny, anyone will do, warm bodies, I don’t care who. If you’re the smartest guy in town, great, sit over there. Or dumb as a post with relatives no one would want, you’re still good enough to be part of this magnificent push. I don’t know how we’re going to handle it, and I don’t know that I need to know. If it works out, great. If it doesn’t, that’s life.

At that point, say it’s a massive failure, we’ll doubtlessly fight it out for turf, then divide the spoils in our own little circles, and celebrate (apart, alas, not together) that whereas we tried and failed, it’s still better to have tried and failed than not to have tried at all. At least that’ll be my argument, hoping to save face, and, believe me, I’ll stick to it. One thing I hate is being wrong with all the guilt that goes with it.

Still, the future isn’t set. We could make it this time. We could try. I’m going to try, and I want you to try too. I don’t want any of us to fail and I never go into anything expecting to fail. All it takes is other people believing in it too, and believing in themselves, because that’s how destiny works. Apart, maybe nothing happens, that’s not surprising. But together, wow, the potential’s there, with hearts joined together, coming together in common cause with optimism, people knowing that yesterday may have been a mess but tomorrow’s not even here, it could be anything.

Look at how friendship works out. We fit together, we've come together, we've joined together. And now that we have, that’s a start. Destiny has to start somewhere, am I right? Friendship’s a great place to start! Then -- what a wild thought! -- like links of a chain, are you with me? Link joins to link, they snap together, they’re strong when they’re together and not easily broken. With you and me and the other guy and the other guy over there, and all those other guys, and those women, and that little group at the library, a study group, and groups everywhere, sports fans, the city orchestra, the oldest man in the Big City (who was profiled on the local news the other night, 103 and expected to die any minute), etc., etc., and people everywhere. Then -- yes, then -- we shall celebrate this great coming together, a destiny like none other!

This is our chance to do it. So let’s quit blowing it, OK? Could someone tell me what I just agreed to?
Posted by dbkundalini at 6:00 AM