Suck It Up, Loser 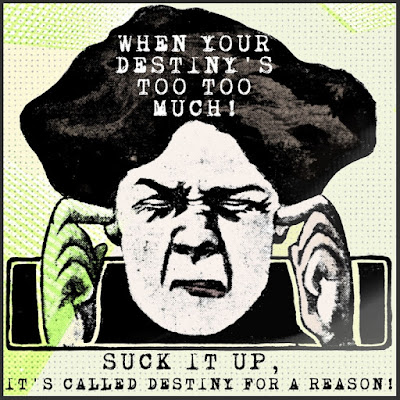 Knowing Your Destiny
Part 10 of 30

In my years as a Destiny consultant, there's been many rewarding moments as you’d imagine. But then it's like everything in my life, it goes to crap and I can barely cope with the static I get from people. Leading me to commiserate with anyone nearby nice enough to listen, and some even seem to understand, “People, aren’t they the worst?!”

It’s kind of funny, though, how generally unwilling people are to agree with me. Which always brings me up short because I usually go out of my way to see everyone's point of view. It rankles me a bit because I thinking the obviously best way in life is to find what you have in common, but some of these halfwits are obviously functioning from somewhere in their lower nature, not smart enough to agree but too dumb to put up a fitting argument. Basically, and I know it’s harsh to say, these are the people who, left to themselves, say, in Africa, would be the first ones cooked.

So, yes, Destiny studies demands a kind of intuitive common sense, common sense informed by continual influxes (and backwash counts) of intuition. Which incidentally is one of the things that makes it hard to convey to others, because you’re forever coming up with seemingly impossible people, troglodyte personalities on the verge of getting-it but always losing it. What’s the solution? You just have to stand back and let Destiny get them, and so you see it, another funeral procession, which always looks completely pathetic on the freeway, unlike the days of my youth in the country when a decent procession was respected on a more peaceful thoroughfare. (If a funeral procession's on the freeway, it's a farce.)

This isn’t to say that I think people’s Destiny is merely to accept imminent oblivion; they’re continuation until now has shown that their Destiny isn’t just to fall dead and blow away. Which is a grace to them. And a grace to the rest of us as well, since we can take constant comfort in the idea that we will more typically be above the hazardous fray so common to unenlightened man. I don’t know what to do about it. Until I come up with a better solution, I’ll just console myself by charging them double anytime one of them comes around for a consult.

I’m common-sense enough, though, to just want to lay the truth on the line and let them deal with it. That’s what my doctor did when I had a broken leg. He told me in no uncertain terms, no matter what I wished for, to turn back the hands of time and avoid this fate, I had to wait the same six weeks like everyone else just to have the leg X-rayed for progress in healing. And I didn’t kick against him, at least with that leg.

For these Destiny-deniers I’m also blunt, “Suck it up, dingbat! It’s called Destiny for a reason! If you come to me and agree when times are good, don’t tire me out when times are bad. I never promised you a rose garden, and I had, I would’ve rescinded the offer long before now.”
Posted by dbkundalini at 6:00 AM