He Regretted His Destiny 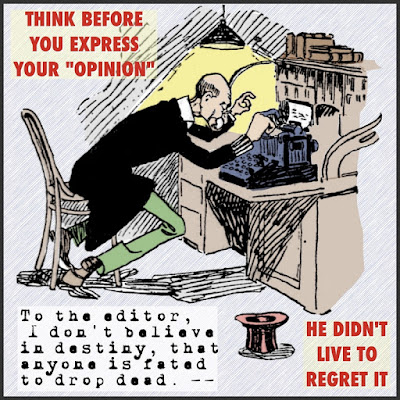 Knowing Your Destiny
Part 22 of 30

There’s been plenty of times that I've not been completely happy with my destiny. Then I tell myself like I’ve told others so many times, “Suck it up!," along with all the other scolding I’m prone to in the face of denial.

To me it’s more of a problem when people are so stuck on their eventual death to the point that they neglect a decent destiny between hither and thither. I myself think of my eventual passing everyday, which since I can’t help it makes me think of it as normal. What else have I really got to go on? The inferior opinions of others? No, thanks! Especially when that number includes those stuck on it, which doesn’t seem to jibe with simultaneously denying it.

Denial of death, though, while obviously wrong, is the best thing some people have for coping. And I guess to a certain extent you have to honor it, at least while they're in the room. But everyone’s a little different, and when they’re “off” what can you do about it anyway? As long as they’re paid up on their consults, it’s all the same, believe what you want to believe. The deeper you dig into denial, in a sense the better for me. Although it’s not my preference everyday to reinvent the wheel, if you’re locked in that kind of infantile mindset, eventually -- whether you say yes or no -- it's your funeral.

But if you want your destiny to be more satisfying, let’s skip the talk of final things at least long enough to steer you into a happier place. Like what you’re going to do in the next year that'll be satisfying and maybe of some use to someone else, if that’s your thing. There’s lots of people who think, “What can I do for my family?” That’s a good aspiration. But if you’re thinking of your death all the time, that’s probably what they’re thinking too. You’ll drop off and whatever money you leave, they’re thinking about it. Which is probably why they’re always telling you, “Life’s more than accumulating things. Live as simply as possible, material things can never satisfy you. More, more, more is the world of the past. We live in a more enlightened time, life is what happens from the inside out.”

It’s all true, of course, but what chisellers. They with their new cars every year, remodeling the house, planning their next expensive vacation, even the baby in an expensive Versace bathrobe. You know they’re behind on a few things, but so materialistic and lusting for more, so they need a new source of income from somewhere. Yes, they made a ton of money, but they’ve spent a ton of money. And what does that leave them? Outright theft, underhanded dealings, or nurturing you along (telling old Grandpa Moneybags to “Go see Grandma.") And it's easy to close your eyes and picture her there, much of the sagging fixed in the heavenly salons.


Take it for what it's worth, my opinion. (Choking noise.)
Posted by dbkundalini at 6:00 AM