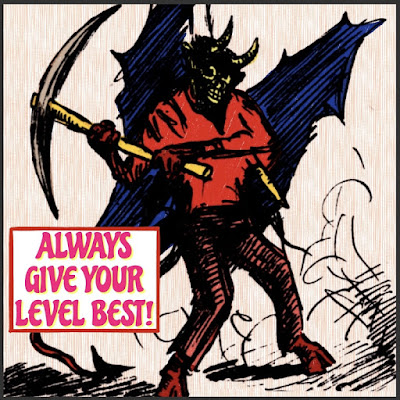 Knowing Your Destiny
Part 3 of 30

I’m going out on a limb to say, This devil doesn’t apply to me in any way. I hate the sight of the Devil and that’s no joke. And it’s the same story if it’s the Tarot deck, where there’s a Devil card. It’s never my favorite card to see. Even if there's positive things you can say about it. Any of the others, including Death, are OK and cards meant for me. But if I pull the Devil card, obviously something happened a little out of whack. Perhaps an enemy is walking up the sidewalk in front of my house. Or is just coming around the corner nearby. Or is somewhere else in the Big City daring me to come out for a decisive rendezvous. But I won’t. I actually postpone trips till some other day, beyond taking the dog out to poo. And if I ever saw a Devil walking by when the dog’s out, we'd need a Plan B. Just yesterday, though, the dog saw a pit-bull and went ballistic, while the pit-bull was quiet and well-behaved. Which one's the Devil?

Here our Devil anti-friend gives us his message, “Always give your level best!” Which is kind of a positive message, unexpected, for a Devil. Although it could be he’s not a Devil but just looks like one. Car wreck? Mashed in a machine? Maybe had chromosome or genetic problems and is actually an angel. I wouldn’t bet on it, but they -- angels -- could just as easily have problems. Remember all the angels in movies lacking wings? Although it’s more likely to be the Devil trying one of two things, 1) Pretending to be a former evildoer who’s gone straight, or, 2) Just more deceit whereby to deceive more insidiously.

How that would work precisely is not a subject I’m given a lot of thought to. Just "Anything Can Happen." But as with the Tarot Devil, like alluded to already, he’s not always a negative but a positive corrective to possibly something unbalanced in your life, eating too much sugar, a reminder not even to tell little white lies, or sometimes meant to ensnare you (“Ah, the cute little Devil”), who suddenly has you in his grasp, the pitchfork piercing you with the hottest sharpest tines ever you've felt. They’re pierced in you and you’re lifted in the air like a forklift, dangled over the fire, and at the last second, in pain and just as you’re about to black out, dropped in eternal flames. That’s a little reward for those of you who like things literal and not just seeing them symbolic of discipline and correctives, which is more of a psychological aim.

My “feel-good” advice, while perhaps not 100% true is at least more pleasant than "Go to hell." So, no matter how screwed up your Destiny appears to be, always give your level best. Try to put yourself in the driver’s seat, thinking this logical “truth,” that Destiny generally has a positive side. Try to see the downers you face as a corrective, steering you toward a positive outcome. Don’t be one who quickly gives in to the idea (like I’m prone to do) that Devils are always literally bad news. There’s about one chance in a million that that’s not so, but it’s better than nothing. So go with the flow. However screwed up things appear to be, continue giving your level best.

Whatever you do, keep your happiness intact to the degree that it’s possible. Don’t let the pick-ax hit you on the way out.
Posted by dbkundalini at 6:00 AM