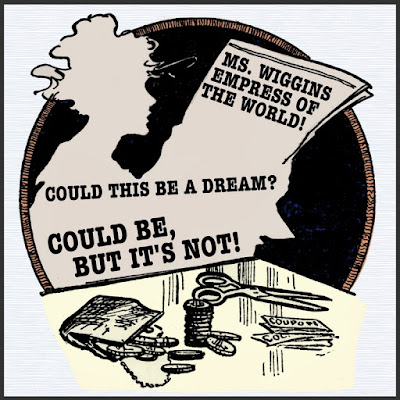 Knowing Your Destiny
Part 5 of 30

“I don’t know.” Ms. Wiggins pondered a new revelation of Destiny, “This could be more than I bargained for.” This dear one thought it through with many doubts. Which is common enough for those uncommon enough to feel the mantle of history bearing down on them.

One thing seemed sure to help, that it was a done deal. The cards of Destiny had been shuffled, the deck cut, the face cards and lesser numbers mixed as thoroughly as any deck -- and judged "as random as we can make it" by various experts in such things -- and the verdict of history pointed squarely at this one individual.

It’s really something, a surprise, when you've been tagged by Destiny. As life goes, it's certainly better than nothing. Although it so often turns out that the person had a better experience when they were nothing. It is hard for them to be so disappointed.

Maybe you're one who's felt the strange weight of Destiny at least once in your life. It feels pleasant enough, but with hidden dimensions of concern. To be thought of by Destiny and in the running like that, then to have the whole apparatus turn around and choose you is not an experience for the cowardly. Although the cowardly are so often the best recipient, because it’s such a surprise and there's something marvelous about existence in it: The ugly duckling becomes the swan! Or an old dumpsite the best site for the palace!

Our destiny, though, often turns out to be temporary, later growing up with trees and weeds and everything rots away, and someday someone shows up with a camera to document its at least temporary demise. But in Ms. Wiggins’ case, she still reigns as Empress of the World! She didn't slide from it in vanity! Yes, she had her doubts, but they went away, and she said, “If this is the way it’s gotta be…” She took it as an obligation, which grew into the realization day by day that her destiny was sweet, like buckets of candy you never grow tired of. Probably chocolate or peanut butter cups.

But for any one of us, you never know; the Empire might grow tired of you. In which case it’s best to stay humble, hoard your candy, and not take any riches for granted. Keep clipping coupons and pinching pennies. Because you might be right back in the same old spot, your good old life before the new life claimed you, and you'll need to get along with the same skills you had before. Easy come, easy go.

That's what happened in my life. I never got a big head, not too big, I kept the same size head it needed to be to fit through in the old shirts I saved. In Ms. Wiggins' case, she kept most of her old clothes, too, shorts, dresses, or whatever, from the previous realm, the backyard garden. And of course they're still stashed away as she still reigns in power as Empress, a very wise woman.

For many of us, Destiny's way seems like a lot of practical jokes and trickery. And wisely we never give in to it entirely.
Posted by dbkundalini at 6:00 AM