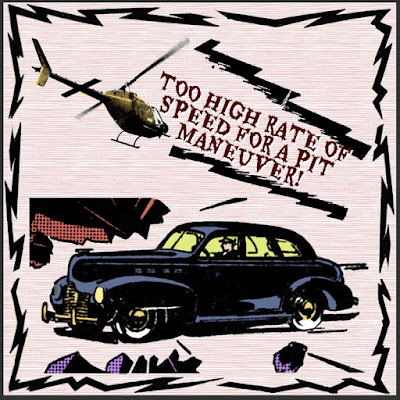 Just a glimpse at my browsing history shows how I was briefly interested in car chases, but am now pretty much fed up with them. It started out I was watching every action-packed minute, then I started fast-forwarding through the many lulls in the action, then finally I was fast-forwarding through everything from start to finish to see how they met their fate.

Along the way I picked up a bit of trivia -- and I’m not sure of either sourcing or accuracy -- that a full 18% of car chase perps get away with it. Strangely, of all the chases I saw, 100% were captured, but they say a lot of chases are called off because of the greater danger to the public in pursuing it. In the ones I saw, there was no hope of escape. You would need the earth to open up and swallow the police, and so far that's never happened. But in real life, if you play it right and become a real public nuisance -- where it's more hazardous to chase the perp than letting him or her go -- that's all it takes to get away with it. (Although they still take down your license number and catch you in the early morning hours.)

Still, quite the lesson! I might not have ever been in trouble in school if I only knew how to maximize my wrongdoing. “You may as well let me dip your pigtails in the inkwell because if you don’t … Let’s just assume you appreciate having hair.” Pretty good lesson, the bigger the nuisance you are the more likely you’ll get away with it. Of course, it’s still hard to get away with it. And there's always the midnight knock on the door, a quick cuffing, taking you out in your jammies, how ya like THIS ride?

One of the benefits of watching car chases -- if you’re new to the Big City, and I’m relatively new -- is it teaches me the geography of the place. Plus, I’ve seen exits and ramps, twists and turns, that I haven’t got time to pay attention to when driving. The freeways are always clogged up pretty badly and if you take your eyes off the road for too long, you’re dead. Making any shortcuts you might find a moot point. Just the other day I saw a chase that ended in a neighborhood I have business in. It was great to see some familiar sights and a few shortcuts. I just don’t want to show up the same time as that guy, because he was badly lax with the standard road signals and rules.

There’s one compelling video on YouTube, and there’s no reason giving you the link because if you’re watching car chases it pops up so often that you’re tripping over it. A guy was in a chase, then got off the main drag but continued on, finding himself in the end blocked in a tiny parking lot that was also a dead end. This is the time for any reasonable person to say, “Clearly I’m not among the 18% who will get away. I’ll give up and try again some other day.” But that wasn’t his choice. He tried to squeeze past the last obstacles in his way, the fence and a police vehicle. When out popped the guns and the cops cut him down in his tracks. There aren’t a lot of shoot-outs to the death in chase videos, but this guy managed it. Sympathy to his family, if warranted. I hate seeing that one pop up all the time because I’ve already seen it three or four times. Warning, you can eat a whole bag of popcorn just watching this stuff.

Are you out there on the road? Keep your nose clean. Obey the rules. Don’t mistake the freeways for a playground. The rest of us want to live. The life you save might be mine. If you’re driving on your rims because you’re too stupid to pull over, you might want to look into life insurance. And so on and so forth. Don’t be stupid, because it’s obvious you are. The Big City hates you (1) but thanks you for the entertainment (2). It’s terrible to get any degree of pleasure in someone's wrongdoing, which is why I’m cutting back if I can.
Posted by dbkundalini at 6:00 AM