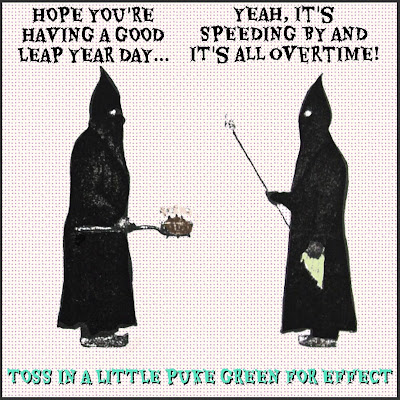 This could really be a red-letter day for someone, being the leap year date squeezed into the calendar every four years. It's one of the oddest days there is, so odd there's nothing else quite like it. Maybe your birthday. But they add a second or take away a minute every once in a while when the orbit of the planet goes out of whack or the sun exerts enough extra oomph of gravity to pull us closer to the inferno. And the same thing goes for days.

On that last point, it was just in the news that we had either one or two new moons enter the earth’s orbit, which was or were very small. I saw the headline on a video that one of them was about the size of a volleyball, but on the news they said it was about the size of a Volkswagen bug. Either way, it’s not enough to make my backyard a lot bigger, but it’ll be a bastard if it somehow hits the house. I've always heard that a penny dropped from space could go through your head and continue its path about 3 foot in the ground. Twice as deep as the neighborhood cat that died and I buried.

But enough about the disasters this date might bring. I’m going to focus on the pleasant, the happy, always trying to put a smile on your face whether you deserve it or not. Leap Year Day always reminds me of the one or two kids in school who happened to be born Feb. 29. And these things -- what they were able to say -- didn’t happen very often, obviously, because in another four or eight years we’d be in middle school or high school.

I do remember, though, two kids -- can’t remember who they were -- saying, “I’m only 4” (or 8 or 12.) And giggling like it was a riddle, how’d they do it? what could they possibly mean? I believe scientists knew, but to the rest of us it was mysterious. So ... this one day pops up once in a while like the rare pimple before puberty. Wash your face and maybe it won’t happen again.

I wanted to get to Leap Year Day this year, with the Coronavirus disease, a weird sprouting thing from certain strains of Chinese food, weather, livestock, or something. The Chinese are pretty smart. If you’ve ever seen their parades, they don’t skimp on exactitude. If anyone could come up with a super killer, it’d be them. And in fairness, if they set their mind to it they could come up with something that would benefit us all, like an antidote right now.

So, what if a few of us die on Leap Year Day from the Coronavirus? It might actually be one of the things that would redeem our lives, giving the survivors something to brag about: "Derek’s been dead four years and it’s been a tough year since his passing." They’re like, “What?” It was almost four years, but it’s much fresher because he only died a year ago...

It could be a benefit politically too, which might not be that great. But it’s true. A whole bunch of people die of Coronavirus on Feb. 29, say it’s a million. They could spin it quite easily, “A million, yeah, that’s bad, but it only averages 250,000 a year, typical.” An even better spin would be this: “Look at all the Leap Year Days since the bubonic plague hit big-time in the 14th century -- killing 50 million. There’s been around 570 Leap Year Days since then, so, hell, that’s not even 990,000 a year, next to nothing when you compare it to cigarette deaths. And if people choose to smoke bubonic that’s their business.”

Anyway, Happy Leap Year Day. I hope most of us make it. There’s a few, of course, no matter what day it is, the Twelfth of Never, who'll never make it.
Posted by dbkundalini at 6:44 AM