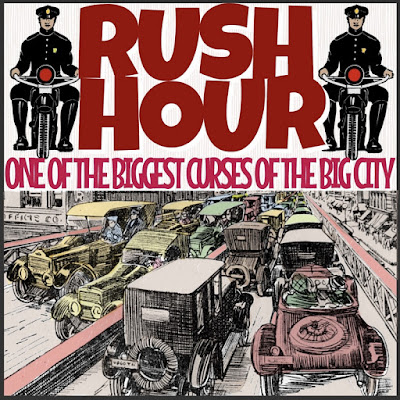 I never once in my life thought I’d plan my day based on rush hour. But I never lived anywhere else crazy enough to go crazy every morning and afternoon like clockwork. Which is the way of life in the Big City, and no one’s thought of a way to fix it.

Maybe no one else sees it as a problem. Which is a legitimate solution to the problem if there isn't a problem, just deny it. I had a friend who had lots of girlfriends and some of them weren’t good for his health. And he didn't see it as a problem. He kept denying that the constant itching of his junk was indicative of something requiring at least a doctor look-see. And then once it began creeping north of the belt-line, it was too late. Sexual fungus finally ate his head off and made a mess of his torso; it's tragic to say, what remained was suddenly of little value. The good times were but a memory, and he died somewhere in the vicinity of his head being eaten and his torso becoming a mess.

But back to rush hour. Even the word we use for it tells the trouble. We’ve legitimized it: “That’s just the way it is,” with city planners sitting helplessly on their ass, throwing up their hands and saying, “Don’t look at us!” Or they speak some foreign lingo, pretending that it’s impossible to be engaged on the subject, when obviously they’re guilty as sin. I’d love to get every one of these scoundrels on the carpet and dress them down with indignation: “You did this, and you are hereby banished to some unpopulated wilderness where there’s two intersecting roads, and the only thing besides an occasional stagecoach are the skulls of those who've fallen by the wayside." That place could use a little more traffic, just nothing like what we’re dealing with now.

The honest to God truth is -- take those guys of the old west -- they’re a lot like the city planners we have today. Completely irresponsible. Have you ever tried to talk to one of them? Whatever problem there is was done by XYZ, someone on the scene 10 to 50 years before they showed up. Or it was in a neighborhood that they claim that they've never heard of. Or, or, or, you name the excuse. They’re certainly creative enough to escape responsibility, you’d think their so-called city planning "skills" would allow for a little more thought! (That's gotta hurt!)

I know it’s too late to go back now and do it right. You’ve have to tear down everything and start from scratch, which at this point would only make traffic jams worse than what we face now, if that’s possible. But if we could redo it, we’d have some decent roads with 50 nicely-paved lanes and the ones we know now would barely be used. We’d just leave them rough like cow-paths, as a sad reminder of having done it all wrong.
Posted by dbkundalini at 6:00 AM