My Move To The Big City 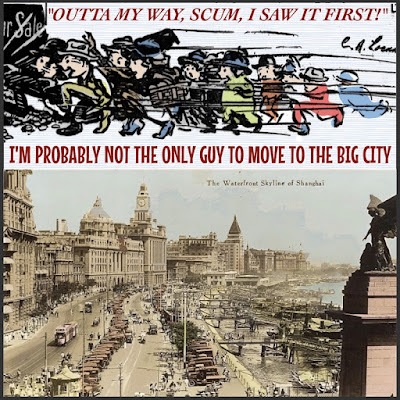 The day I moved to the Big City was a busy one. I'm not sure how I did it, whether it was timed according to my personal fate or if there really is a big hand in the sky guiding everyone’s ant-like destinies lockstep, but the day I showed up a bunch of others did too. We didn’t exchange names and addresses. I barely knew my own address and had it written on a slip of paper so I could recite it.

Now everyone in the world wants to know where I live, the specifics of which I don’t want to get into anymore, being a public person somewhat in demand on the speaking circuit. I just tell everyone it’s somewhere east of Shanghai and also west, depending which way you go. I was drunk one night and they needed to help me home and on that particular night east of Shanghai was closest, only a few blocks. West was prohibitively far.

There were others that day, all of us getting driver’s licenses and worrying about transfers of insurance policies, etc. There’s always more to it than you hope for. But once here they don’t want you easily shrinking back and leaving the Big City, because the whole place runs on people power, the more the better. Which is also true of my small town, and they feel the pinch greater there because taxes are what keeps the place afloat. So it was tough saying goodbye. On the other hand, you might recall, Grandma’s house (where I lived) had become a hell hole, leaking, molding, then there was a fire which made it even less habitable. The rules on rotting domiciles, especially after they've been on fire are strict. They came with bulldozers and trucks and hauled the house in pieces to the dump. So whatever they're losing on taxes is partly their fault.

I even tried camping on the site in a tent, but that’s also against the rules. Stupid place, very picky. They're just very strict, whereas in The Big City you could camp anywhere you want, if you find some trees with nobody around (good luck), and it'd take quite a while for them to evict you. The only things on the property back home that lets me know it was once my home are the big maple tree and the water pump Grandpa installed sometime in the 1920s. I stopped by my grandparents' cemetery a few months ago and felt some relief in the thought, "Everything goes to crap sooner or later, it’s not my fault." We parted friends.

Still, me a Big City guy? It’s hard to believe, but indeed I took the plunge, plighted my troth to the place and I've still got a ton of fears to prove it. Especially when I have to range so many miles from my current place to get anywhere. The traffic is terrible, the only familiar faces I ever see are the neighbors and employees at the grocery store. I had sort of a semi-close friend very briefly, then his cat got pregnant, pissing off the landlord, and he vanished one night. It was me and another neighbor, "Black Steve," conferring at his door, both of us deciding, “He’s gone!” But I have not vanished. And if I do, not even Steve will notice, because we literally haven’t spoken since that day.
Posted by dbkundalini at 6:00 AM