The Freeways Are Terrible 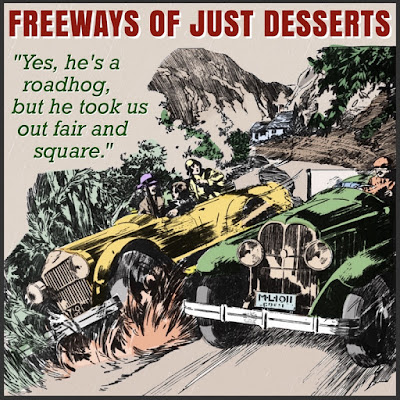 During my time in the Big City and all the traveling I have to do, I’ve gone from the greenest blushing newbie to something of a critic, and since then to fancying myself a city planner. I could show 'em how to do it! That’s sounds like a lot of boasting, but expertise works like that; the expertise bug hits this guy, this guy, and sometimes even me. Really, though, how hard would it have been to install some decent way of killing road-hogs?

There actually are a lot of good ideas from those of us with the city planning gene, with the biggest drawback being there’s a lot of stuff set firmly in place, and that looks like how it’s going to remain for decades; they say we just can’t change. Now, I have nothing against my fellow city planners from 100 years ago, 50 years ago, 25 years ago, or even those from the last few years. Yes, they failed miserably, but they gave it their all, and now thanks to their great failure we’re that much more behind the eight ball and in the ditch.

Do I take responsibility for any of this? I actually don't, and if you find someone who takes responsibility, those are the ones you should never listen to. The rest of us can dissect the situation, carefully making the incision, gently anesthetizing the patient and opening the various folds of fat around the carcass, looking for problems wherever they're found. And later, we'll sew it all back up and either throw our hands up in desperation, cashing in our chips because nothing can be done or working our healing magic, making things right that have been askew for decades.

The only responsibility I take is to admit the fact that had I been there, these various traffic jams on the freeway would’ve never happened. I would’ve recommended a wider road where bottlenecks are constant. Or a narrower road where hardly anyone goes. There's a mall or two where hoodlums hang out; I'd close those ramps entirely. If you can't keep your nose clean, we don't want to deal with you. The fact is, I can see the whole situation, not just half of it like so many of our uninformed city planners. I know what they say, with the gift of hindsight everyone’s a critic. But I'd just brush that off and take it a step further, fining the families of city planners from the past, or at the very least herding them together and banishing them from town, if there's an open lane for their deportation.

A lot of the freeway problems we have -- more cars 'round the clock than there’s room to keep them -- were put in place by functionaries at the highest level, the Feds. And the best you can say about them is “Cookie cutter!” They found a pattern that worked in one place, where basically five cars was a busy day, and foisted it off in various places around cities destined to have 10 times that. So now we’re bogged down in endless traffic jams, stacked like dominoes, just waiting to be tipped over and destroyed. I'm not sure what the penalty should be for them, although continuing to live in polite society is not among the options. So take your pick, banishment or death, whichever is most economical.
Posted by dbkundalini at 6:00 AM