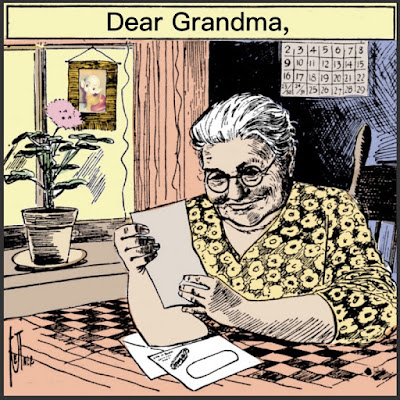 The same thing happened to me that's happenedd to small town immigrants to the Big City through the ages. I got down in a funk, and had to go to one of the raging hyenas who sit in their ivory palace mental clinics just waiting for easy prey, a quick buck, from supposedly "counseling" us, tamping down our desires toward a popular uprising because we’re so desperate for the old ways.

And, yes, my eyes were closed to the situation, that’s how desperate I was. Then, like sheep to the slaughter -- They still slaughter sheep, right? I haven’t had a sheep and biscuit breakfast in 30 years -- the guy had me with the teary-eyed Big City therapy exercise of “writing home.” In dark moments of life like that I don’t fight back as I should. I wish I would’ve seen through it immediately and literally gone "full terrorist" on that guy’s office, which you can do and get away with it. Counselors love bragging to other counselors about clients who completely erupt and destroy their office. The main problem is that there’s very little you can do to piss off a counselor, so they win.

Anyway, the dude roped me into the simplest, stupidest technique -- what am I paying the guy for when I had to write my own letter -- the Dear Grandma letter they make you write. Since she was the main authority figure in my upbringing. And who could win me over, back to sanity, any more than Grandma? See what the Big City does? I sort of support the idea of writing to Grandma, but the idea that these worms forced me still rankles.

“Just pour out your heart and spirit,” the counselor went on, his straining weasel voice giving me the creeps, like someone or something that just slithered out of Eden, a snake from central casting if I ever met one. Yet with all that, the wool was still pulled over my eyes somewhat. It was a battle royale, really, as I saw the truth that I should reject The Big City, but I also knew that under the circumstances, Grandma’s house being moldy, pulled down and hauled to the dump, I had very little choice. “Go along to get along.” So I did my best, putting the letter in my own words, not copying out of a book:

"Dear Grandma, This is your old sonny boy here, hoping you haven’t forgotten me during your stay in the heavenly palaces. You probably haven’t. You may know more about me than I know about myself, from your perch above, so I’ll tell the truth. The counselor has narrowed down most of my trauma to the loss of our house. Remember, it was already very old. And the construction seemed to be a jumble. Starting like a small shed, then being built on over the years, whenever the mood struck our ancestors. It was always a patchwork. Weird cracks between pieces, and the wind would blow and separate everything even if just slightly. Those places where the roof didn’t join perfectly then took on water. Drizzle was no big deal to the better houses, but in your house it was Public Enemy No. 1. Then you and Grandpa gave up the ghost, leaving me as the caretaker/resident. On a limited income and with no knowledge of maintenance beyond patching the obvious. Which over time can be hard to catch up on. Well, eventually, the city came by and shut the place down, and came in with a court decree that I vacate, and finally carted it off to the dump wall by wall, everything from the floor to the roof, in that order.” My last tender words over the rubble were, 'It was nice while it lasted.' Which was a tribute to you and Gramps. Who probably could've done a better job maintaining the place when it was new."
Posted by dbkundalini at 6:00 AM