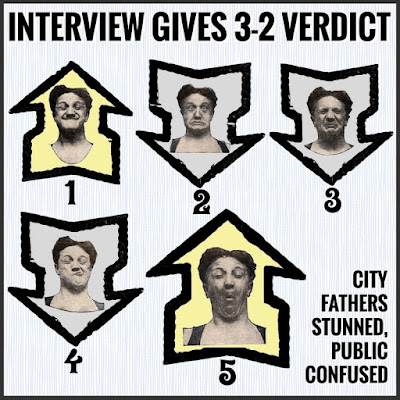 Of course it’s easy for me to sit here day after day railing against The Big City. You know I make a lot of good points. And this isn't something I’d lie about. I actually live in The Big City -- a guaranteed fact -- so everyday I'm mulling it over. Between watching TV, feeding the dog, and doing laundry along with a bunch of other chores. So it’s not like I’d be unfairly biased against it when it's now my whole life.

So that validates some of my opinions if not the bulk of them, and perhaps all of them. But no one can be right all the time. Whereas the less you say, naturally the better your opinions are and the more squarely they'll hit the bullseye of the public’s sense. I make that claim for myself, and statistically it’s borne out, I'm either always right or close, hitting the sweet spot on most of my statements and beliefs.

All that said -- which alone would prove my point -- I was still willing to put my opinions to the ultimate test by arranging a completely random interview with an individual, with all the safeguards and controls that go into it to keep the statistical hounds at bay regardless of other factors. Like it or not, I definitely went the entire extra mile, a lot farther than most guys go to show good faith.

OK, here's how it went: First, I took the time and expense to assemble a focus group, and they seemed fully prepared to judge the case. But  I detected bias with one guy saying it was a good day to be alive, which tainted the pool. I abruptly dismissed nearly the entire session with severe prejudice. I spared just one guy of the group, the same guy who thought it was a good day to be alive! The others were out, not only being tainted, but they were also either pessimistic or suicidal. It was this other guy's optimistic spirit that made me optimistic that he’d see it my way about the Big City.

This, however, was a sensitive moment. I had to keep him from bias, so I asked him not to speak again but to signal his verdict on The Big City solely by facial gestures. So we shall proceed to the questions and his facial answers:

Question number 1: Do you like sticking it to the man? A smiling UP, with eyes decidedly closed. For me, this was a big positive, saying he was more than happy to stick it to the man. I figured the survey would be a slam dunk against the Big City, but we still had quite a ways to go.

Question number 2: Is the Big City a good idea for children and other living things? Instead of his big smile just seconds before, he became like a wounded animal at the very thought of it. He gave it a firm DOWN. His answer strengthened my stance that the Big City is anathema for living things, being a negative gesture. 1-1.

Question number 3: Would you like to date the mayor of the Big City? A quick scrunchy-face DOWN. Which was a big surprise for me, because the mayor’s really quite an attractive guy. But it's probably just a case of him not swinging that way. Suddenly we were DOWN 2-1.

Question number 4: I was hoping this wouldn’t be a DOWN, because with only one question left there would be no way for the Big City to possibly eek out a victory. But I asked anyway: “What is your favorite thing about the Big City?" Since he could use only facial gestures, he seemed disappointed and would've preferred to give an oral answer. That gave us a DOWN, 3-1, with no favorite thing. Now the only way of climbing out of the hole being for the last question to be UP along with something underhanded. I could've gleaned that he'd rather marry the mayor than merely date him. But we didn't go there.

Question number 5: In what way is the Big City like lemons? He did what everyone does when they think of lemons, puckered up in a positive way -- making it an UP vote -- rounding out an otherwise disappointing total for the Big City at 3-2 DOWN.

So it was a negative result for the Big City, justifying my original negative take. Reflecting back on the interview, I thought it over, and realized how close it actually was. Clearly, the interpretation of the answers might’ve been jimmied if I were that kind of guy, a Big City shyster. But instead I played it fair and square all the way.
Posted by dbkundalini at 6:00 AM