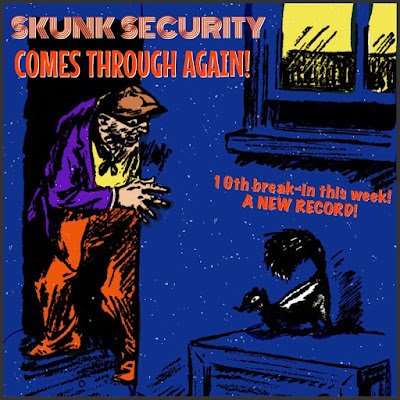 It’s official! According to Skunk Security, I’m averaging a higher than average break-in rate at my place in The Big City. Which is a mixed blessing when you think about it. One, I'd rather not have any break-ins, but, Two, At least I’m getting my money’s worth … and more.

But it's kind of weird because some of the other houses in the neighborhood don't get this kind of traffic and most of them don’t even have a security system. You'd think they’d be hit harder, but I can't complain, I'm getting great service with Skunk; they’re always here within the hour, and the police generally show up at some point.

I was at a movie the first time and it was a big shock to get the message that my alarm had gone off. Just what I feared! As soon as you put a security sign in your yard it’s the same as saying you have something worth stealing. Most of the neighbors don’t spring for a security system and they’re doing all right. About the worst thing I heard of was a few grudge break-ins, people who know the neighbors and have something against them. There’s a family up the street whose daughter was dating the guy who shot up the liquor store a few months ago. He’s been in the area and shot up their mailbox.

But back to me: You don’t forget the first time you’re broken into, no matter if they took something or not. The first time they got an old VCR and a video camera I had since the ‘80s.The second break-in I was actually at home but in the basement. The security system didn’t go off since I was home. I went upstairs and didn’t see anyone. I flagged down a neighbor and he helped me search the house. I hoped the perp was already gone, but there he was, like vermin, in my closet! He got up, creeping toward the living room, not wanting to make a big deal about it. Then he made a dive through the window and ran up the road. I gave chase but couldn’t keep up.

Some of the other break-ins were probably by friends of his, even though you'd think he would've told them I ain't got crap worth stealing. A lot of sentimental stuff, Grandma’s picture, some things from Grandpa, a Univac computer from the ‘50s that’s not good for anything but I'm still hoping to power it up if I can find the right nuclear power plugs. Then, more sentimental and irreplaceable, I have Grandpa's toupee, which still has the original masking tape on the underside. Otherwise it's in terrible shape. My dog was shaking it one day, but as long as there’s even one hair left, the damned thing stays! And thank God the cops came back with it, dangling it on a stick like they were afraid to touch it. The bullet holes bore mute testimony of their confusion.

And, I can’t even remember the other break-ins. The alarm took care of them, I vacated the premises, with the worst part being I came this close to tripping over a white ‘possum scurrying up the neighbor’s drive-way! About scared me to death, truly. I’d like to sic it on the thieves; they’d never come back. Trade in my Skunk for a Possum, that’d show ‘em.
Posted by dbkundalini at 6:00 AM