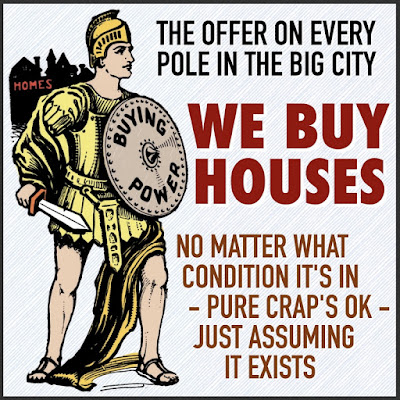 I grew up in a house. As far as I know my parents bought it legitimately. They didn’t confide with me a single thing about it. It just happened that one day we moved from the old house to a different one, in a different town, and that’s where I grew up. These days, with there seeming to be some shenanigans about buying houses -- I don’t know the ins and outs -- I should consider myself lucky to have that experience, and how secure I felt.

I’m thinking I was very lucky because there appears to be a thing going on about mass-buying of houses and I have no idea why. Every pole in the Big City at one time or another has the offer to buy your house. Some of them are professionally made signs, stamped out at a rate of a hundred a second, obviously by someone either desperate to find a place or combined interests cornering the market or with some other motive. I can think of bad motives, but I’d hate to nail it with a haphazard guess and find myself in court, brought up on Disparagement and Malice with Malicious Intent, which could get me 5 to 10 in the Big House, which incidentally is up for sale.

O, if I could just gain entrance to the meetings of these people who want to buy every house in town! A fly on the wall, a seemingly mentally-off maintenance guy, or bugging them in their very lair, which might not be up to code. Then I’d find out the real skinny, and be able to swoop in (to the extent that there is malice and justice-doers who would reasonably do justice). But it could be something as malevolent as wanting to tie people up in knots, where they think they’re selling their house when they’re really obligated to pay you consulting fees till the 100th generation. I hope it’s not that bad.

Or, I suppose, it could all be quite legitimate. They’ve examined the market and figured out that if you buy every house in town, eventually people will need to come to you if they want a house. And having cornered the market, whatever price you name is by necessity the best they can get. Unless they go the old route, just buying an empty lot and building their own house. It’s tough for most of us to do that, whether it’s the first big problem, the expense, or the other problems, being so suspicious of everyone that we know that if we tried it the builder would have hidden cameras throughout the place filming us as we showered.

These days you can’t be too careful. I’ve been watching some videos of guys who build contraptions and putting them on their porch like they were a delivery. Someone else comes and steals them fair and square and are later surprised when they explode and saturate their environs with glitter as far as the eye can see. So there’s always someone up to no good. In fact I’ve learned to be so suspicious of everyone and everything, I ask for ID when I see myself in the mirror. And only realize a few minutes later that it was me and my ID’s with me in my back pocket. I look at it and dismiss the case.

Why are all these people -- and it could be the same seven or eight every time, and it just seems like the whole world’s gone house-crazy -- snapping up houses, and lots of crap ones at that?
Posted by dbkundalini at 6:00 AM