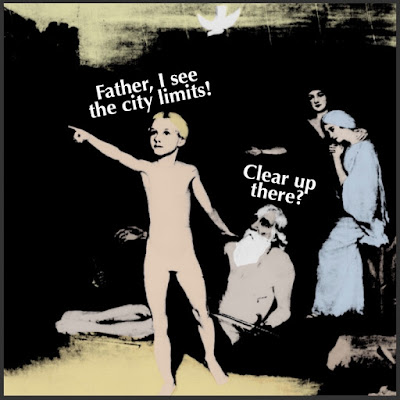 I’m a big believer in the mystic, the innate, the wise words of innocents who “don’t know” in one sense of the word but potentially know it all through some sort of inner sight that’s mysterious to me and other living creatures.

I keep hoping I’ll find that mysterious quality, and maybe I have to a certain extent. I think if you have it, and I’m not saying I do, it’s news to you. Meaning there’s a certain level of complete innocence at play. The actual Messiah might know He or She is the actual Messiah, but they’d know it in some UNknowing way apart from ego drives. Which might be part of the interpretation of the old phrase “A Child Shall Lead Them,” because if it were an adult, and this is not necessarily true, with the adult’s baggage of ego and adult drives -- hubba hubba -- everything might be as corrupt as the very system that needs transformation.

The Big City can’t save itself. Just as the smaller town can’t transform itself into the Big City, not that they should ever want to but they all do. Yes, Podunk City’s out there saying, “We could make the name Podunk City synonymous with Metropolis if we only joined backbone to assbone and got it done.” How hard could it be? First, you believe. Second, you get the Pure Child to lead the way. Third, you get the bastard done!” A dream, settlers, builders, roads, and of course a city landfill where kids can play, throwing bricks through old TV tubes, shooting unwanted vermin with bows and arrows, and all that fun stuff. You’ve never really seen it all till you’ve seen that, at which point you repent.

But I’ll leave the genesis of the Big City from a small town to another day that shall never arrive. And focus only on the Big City of today, which doesn’t have a landfill available to the general public to even see, let alone play in. I’m in the Big City, that’s obvious, and do you think I’ve seen the garbage processing centers and their place of ultimate repose. I certainly have not, but they're out there somewhere, hidden away. That’s why the garbage trucks never show up at a particular time. They’re so busy obscuring the path lest anyone see where they go. Just yesterday I saw a garbage truck on the freeway trying to outrun the snoops. So a word to the wise, don’t even try to follow them. They've got a free run on the town and they can drive all day long and weeks at a time without penalty if they even suspect they’re being tailed.

What about aerial photos? This too they’ve dealt with, because the sky’s an easier thing to monitor than the road. Still, they don’t leave anything to chance, and I’ve seen more than one garbage truck shoot planes out of the sky.

See our boy of innocence pointing to the sky? He knows by intuition where the dumps are, but he has more on this mind than trivia. He not only wants to escape the garbage trucks and planes, he wants the life of transcendence that he’ll never know within the Big City. Because the Big City keeps you busy on its own brand of trivia, who’s sleeping with whom and where the garbage trucks go.

The old father used to be the young boy, in his day. But he was sidelined, a terrible thing. It's a terrible thing, too, to be the young boy of promise in your day, only to be sidelined. I could break down right now and cry. I was the child of promise, board-flat naked like that kid and without shame. And now here I am, an old has-been, no longer a child of promise. I spend my day worrying where the garbage trucks go and not that which transcends the Big City and time itself. Grandpa would be ashamed of me. Although I should be ashamed of him too. He was never board-flat naked either. He was a good guy, but I never saw him do the least thing that showed him to be the child of promise.
Posted by dbkundalini at 6:00 AM