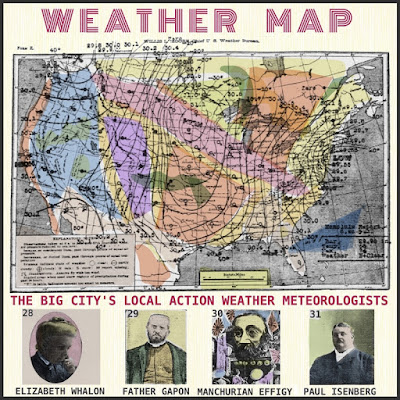 It doesn’t take a long time living in the Big City before you know certain truths that are so unambiguously true that at some level you already know it. Remember books like “Everything I Ever Knew I Learned On My Own” or something. The way I took it was that everyone already knows everything and that the ultimate cause of school, etc., is merely to bring out this innate knowledge. That was Plato, maybe, which if it’s true it's something at some level I’ve never forgotten. If only I’d known this or realized all my innate knowledge when it was time for the final test, I wouldn’t have ended up with a grade-point average equal to the population of the typical ghost town.

One of the most obvious truths in the Big City is this, that the most respected guys in town are meteorologists. I upchucked this innate knowledge one day while watching the news. I watched their demeanor, the way they constantly referred to their next report “in two minutes” with the “latest updates” of “life-threatening storms” and “critical information.” After a while of watching the news, that’s all I could focus on, how well-respected, all-powerful, and righteously situated these guys are. They’ve got it going on, they know they do, and they’re riding it all the way to the bank. They've got a rare thing happening for them, to be the most respected people in town and know it and deserve it.

And everyone plays favorites, which is critical for the stations. Because I’m new to the Big City I didn’t get a bit of guidance from Mom or Dad or Grandma on the best weather guys. I merely watched, liked their smile, their dress, the demeanor of various ones. Then in my private time I assimilated all the information and charted it out, the one I liked the absolute best. That’s the only one I watch now. And if he ever dies I’ll just have to look out the window and see what the weather is. But doing it that way it could be too late, since it takes me some time to get my bottom sat on the top step and inch my way to the basement. It’s a scary process, because some basement urchin could crawl in my pants if I’m too slow and bite the crap out of me and my precious privates, used mostly now only for the most innocent purposes.

But the weather’s a terrible thing to mess with, of course, so I'd have to pick someone. And hope the new guy's cut from the same cloth, or I might turn to trusted friends for their advice. I don’t want anyone too close to retirement, so age is a factor. But I don’t want too much of a newbie, because experience counts for a lot. I would probably cut corners on the auditioning and do a search for the highest rated, most respected, etc. My only hang-up on that would be the teaching I got as a kid not to follow crowds. Although crowds are wiser than my parents gave them credit for. If they’re stampeding a particular direction, there’s always a good reason. You can corrupt a few people, and that’s a crowd you don’t want to follow. But when the crowd’s in the millions, and they’ve survived every storm the Big City’s thrown against them, they didn’t just do it on their own. They had the help, the gracious assistance of meteorologists, and that’s good enough for me.
Posted by dbkundalini at 8:33 PM