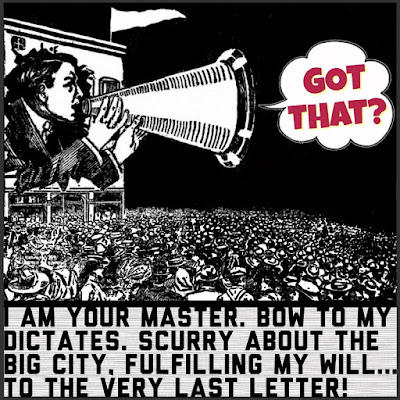 Once again, the Big City takes us to a dark place. At least it's kind of dark, the shadows creeping everywhere. The barest light is sooner or later extinguished, with what little bit of light that remains flickering with promise, but the promise is next to nothing, then it’s gone. Everything is fairly dark, with moneyed interests and the way they’re forever greasing each other's palms, winking, signalling the separation of groups into those on top and the rest of us. The supposed new day begins, then it’s immediately dark, and that’s all the light we see.

How everything goes to hell like this -- which is my go-to sociological theory no matter where I live -- is a thing both to rue and celebrate, though darkly. Certainly ruing it is warranted, because the response to every injustice ought to be a stand against it. But because this response is never welcome with the powers-that-be, it’s tough to sustain, and is usually met in one of two ways: 1) A passive/aggressive affirming of their stance, then quietly tabling it once you’ve been sidelined; and, 2) An overt rejection, threats, mental/physical harassment, browbeating, criticism both to your face and subversive, or strangulation, or telling you the so-called parable of the Good and Bad Eggs, how the Good Egg sits unmolested in the refrigerator till it’s eventually retired to the dumpster, whereas the Bad Egg is immediately killed and eaten, although not digested but brought again to public shame with heaving and hacking, and all of it with severe prejudice. Ho hum.

But, my friends -- and my expertise in Big City sociology is more or less something I picked up on the fly with minimal experience; I’m a fast learner -- they can’t hide the truth forever. From the great unwashed masses, yes, they can hide it in a sense. Those unwashed masses are happy to live their pathetic unwashed lives constricted like this. It’s the old line about bread and circuses, keep them sedated, docile, and distracted -- mentally stymied, socially sidelined, forever in the vain pursuit of being Top Dog or what have you. Step by step, then -- and there’s lots of baby steps here -- they're finally kept in their place only apparently by force. Once inured, they maintain their station at the bottom rung by a sort of sleepy forgetfulness, knowing next to nothing of their lives. What an objective person would see as constriction, they see as freedom.

Just going over the more cheerful aspects as I have, I also see it as a negative thing. Which is only made worse by our own complicity, failing to keep our minds fresh and free, basically what’s common in the small town setting. There are, however, in the small town the Big City wanna-bes. Cheerful on the outside, but conniving behind the scenes, they want to emulate the Big City, and bit by bit to exercise power toward that end. Example: “Let’s build a spouting fountain in the park!” The unusual unwashed masses think that “sounds good.” In the interest of time, I’ll leave out some of the social progression here. But a couple months later you’ve got your precious fountain, then suddenly the town is the Fourth Reich and in deep. They may as well have moved to the Big City when they had the chance and forgotten the middle man!

It's all so typical, I almost regret boring you with the same old run-of-the-mill details. But the Big City is an octopus with its tentacles around the so-called Master’s legs. And the Master and the others are sooner or later, inevitably, dragged down to their demise.
Posted by dbkundalini at 6:00 AM