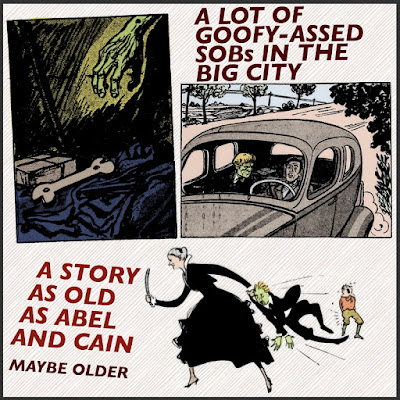 This one has great interest to me because it’s rare to get in on the ground-loor of people’s lives. Usually when we get to them, whether in prison or old age, we have no idea what they went through. What was their journey? How'd they arrive as they did on death row, with a hideous smile and the vain hopes to carve just one swastika on the warden's back? What's the backstory?

But then there’s the rare case where you have not only the resources but the clearance to really get in there and study the quick disintegration that life sometimes manages -- evolution in hyper-drive -- that drops the whole enchilada, from juvvy hall all the way to the electric chair. For which I guess we can only thank the gods above, who know all but tell little. In this case they’ve shown plenty…

I will, however, cover it somewhat with a veil, because the families are still out there, ashamed as they rightly should be, for having raised two pea-brains like Dirk and Dingbat. And even by unleashing them among the other goofy-assed SOBs in the Big City we have, at least in a roundabout way, condemned their family as well. Because it’s true that no matter how bad you are there’s a back story, a system that failed you along the way. The idea that we’re always wholly responsible for our outcome is crap. Show me a thoroughbred and I’ll show you a breeder and trainer. And the same goes for every pernicious runt.

Dirk and Dingbat had their run of the Big City. Their story has been told a thousand times, not always with the same names. But it always essentially boils down to the same conclusion. Neither one was any good, but put together they were twice as bad. It would’ve been enough if each had acted on his own, Dirk without Dingbat or, if you prefer, Dingbat without Dirk. The only change I see is neither would’ve had the same bad influence of the other, and without a strong influence the situation might’ve been entirely different.

Let’s think how it might’ve been. Dirk with his obvious advantages might’ve gone in for his kindergarten physical. And instead of being drawn as he was later to a life of crime, have been inspired by the kindly physician and set an early goal for himself that he too would be a doctor. It’s true, doctors come from somewhere. They don’t just get old and pop into a fully blossomed doctor. I was talking with a doctor literally just yesterday about my downhill slide, being a few years older than the average person. And I had to think, a doctor, there but for the devil that could’ve been me. I wouldn’t have minded getting rich mapping veins or whatever he does. And cheerful, too! But forget about me, that could’ve been Dr. Dirk.

Then there’s Dingbat, a little green around the gills, with severe disadvantages, the other kids berating him mercilessly as Baby Hulk, etc., the kind of nasty nicknames we hate hearing. But when you’re a kid it seems to come with the territory. Again, thinking of me, I might’ve been Dr. Dingbat but for my lack of green skin and the fact that no one encouraged me to look into doctoring. They didn’t exactly say I’d never amount to anything. Whatever, it had to be even worse for the actual Dingbat.

Both were obviously disciplined, as seen in the graphic. The full extent of that, I guess we’ll never know, but we know the influence toward crime was even greater. This sad state of affairs led to a sad conclusion, as they became the terror of the Big City, and ended up, not vein-mapping doctors, but rock-pounding criminals, and took their place among the goofy-assed SOBs who do those sorts of things and end up tragically, slamming a wrench on someone's head or worse.
Posted by dbkundalini at 6:00 AM