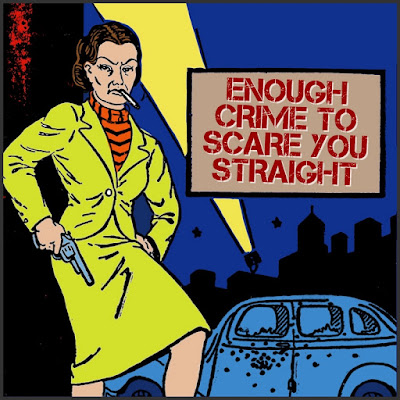 Here we have a car that I likely would’ve given away, with all those bullet holes. As much as I'd love a car like it, it obviously saw its day, and had better days, like the day they drove it off the showroom floor. When they said, “This one's a beauty, a real nice model. Let's keep it in tiptop condition, and someday when it’s collectable, we’ll put it in a barn and only take it out to warm the engine, then back it goes. It’ll be worth a lot of money if the hood doesn’t fly up someday and ruin it. Which it won’t!”

Then it turned out to belong to Bonnie and Clyde -- making it eventually collectable anyway -- who got it so shot full of holes that their main goal wasn't to preserve it but to run for their lives. Of course Bonnie and Clyde lived in a time when you could get away (a relatively long time) robbing banks and shooting people. These days they would’ve been nailed five minutes after the first job.

But here in the Big City there's a lot of criminals who do get away with it for a long time. But they’re not as blatant and in the open as Bonnie & Clyde were. They’re holed away in an office, pulling the strings for a series of jobs by low-level thugs, criminal wanna-bes, and they’re doing jobs that spread their realm out like many tentacles. That’s how I picture the drug business. It’s not just one guy but a network, and you fit in the network -- a secretary, a guy who buys plastic bags, or a mule -- or you don’t. If you fit in, you prosper. If you don’t, skritch, the noose takes another guy by the neck. And they find you hanging from a tree, your DNA telling a mute but plain tale, this guy was a crook.

At this point in my life I’m not trying to be a crook and I’m not trying to be a hero. But the Big City’s obviously so completely rife with crime of every caliber that we could use a dozen super hero do-gooders out there cracking a few skulls. That'd be a good life, to be the hero. But I can see both sides. If it’s not hurting anyone, and in some cases actually helping people with glacoma eye pain, what’s the harm? And if the crimes are more or less technical, they themselves could be a crime against nature. Which is no good. But society has come along with certain dictates and, whether relevant to anything or not, we’re stuck with them. Say no more, I know. Mum’s the word. Let them shoot it out at city hall and every block from there to here, I’ll just sink out of sight and mind my own business.

My recommendation, for your own good avoid every criminal influence, whether genetic or not, and if you didn't avoid it, please go straight before it’s too late.
Posted by dbkundalini at 6:00 AM