No Solitude In My Own Cellar 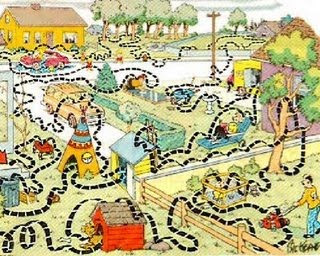 Yesterday was an anxious day. I was in the cellar and found the grange file in the box. So far, so good.

But I clung it to my chest, knowing there wasn't a backup copy. I hate the idea of not having a backup copy. Blame it on computers. It's so easy to lose things.

I know we used to go see the country music show at the park when I was a kid, and we'd all be lined up to get autographs. It seemed normal then but if I was a kid now I'd ask for two, just in case I lost the first one. And, come to think of it, I don't have any of them anymore. So I should've learned my lesson early on.

But there was no time to take the file somewhere and get it copied. Anyway, I might be waylaid on the way and then my enemies would have the file. Do they know I have the file? Maybe it was hooked to a wire and set off an alarm back in the grange barn when I moved it, meaning a vast force of hooded assassins and their horses will be coming for it. These are the kinds of thoughts that go through your mind.

Holding it to my chest, I felt my heart racing. That's real. That used to happen to me when a teacher was about to call on me, or worse, at the end of a really contested eBay auction. I had an auction sniping program that literally made your final bid with the shot of a Thirty-Ought-Six. I used to win an auction and open the windows to let the smoke clear. It gives you a heart attack. I envy guys with a pacemaker, because that's a good backup.

As soon as I had the file, I realized there was no solitude in my own cellar. Other people had been there -- the original house builders as well as family members in the years since. And anyone could suddenly appear. So I got up and with haste went upstairs. Grandma was turning. Must not let her see me coming from the cellar or see the file. The living room has had people through it. It's our main room.

Outside! Eventually my path around the half acre was like the kids in the Family Circus comics. Over by the well, by the pussy willow trees, by the shed, in the garage, by the tiny grove, at the south corner, next to the well, on the roof, where the old trellis used to be, in the blackberry patch...

All along the way I felt the mounting breeze, starting off slow and easy but building ever more steadily till it was a pleasant light breeze. The pages could've gone falling to the ground and been blown randomly toward the north. Or they could've spontaneously combusted in the light of the sun -- they'd been mostly in darkness for decades.

I thought I might sit on them, but any kind of dew on the ground would smear them. A couple of the summer's last moths flapped an irregular course near me. Moths! Moths eat paper, right? You need a cigar in your suit pockets to keep them away. And I wasn't wearing a suit.

I stopped in my tracks. Gotta get a grip. I've already had a million chances to lose the file. Need to consider the odds. I should've stayed in the cellar. I returned to the cellar, haunted by the ghosts of all those who'd been there before. It was oppressive, as I can plainly attest, but it was a more controlled environment.

So there I was. At the end of a mad trek around the property. Back in the cellar. Finally settled, I looked down at the only copy of the file I had ... and with the greatest care and trepidation, opened it.
Posted by dbkundalini at 9:58 AM