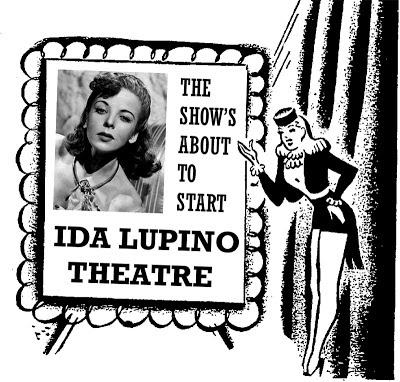 What did I know about Ida Lupino? Nothing. Except she's the answer in crossword puzzles to the clue "Miss Lupino." When you have a name like Ida, you can achieve crossword immortality.

But then, in wanting to watch old movies, and suddenly, through the miracle of watching YouTube on your TV, I've discovered a movie sensation, whom I would immediately sign to a long-term contract were that possible, by the name of Miss Ida Lupino.

I guess I've only seen three movies so far, but all of them were ones where Ida was heavily involved in making them. In fact, she was the director. And starred in one of them. They are, in the order of me seeing them, The Hitch-Hiker, The Bigamist, and Not Wanted. And guess what, they're fantastic.

The Hitch-Hiker is about two guys who happen to pick up a particularly noxious hitchhiker. He's already killed others along the way, and now it's their turn. He manages to keep them under his terrible control for virtually the whole movie. It's very atmospheric. They're out in the wilderness, the mountains, the blowing dust, desert rocks, and little out of the way roads. I know this much, even if you're not a violent person, before the movie's over you'll want to strangle that bastard with your bare hands and send his soul somewhere worse than hell. It just so happens, the guy is the same guy who played the hapless prosecutor on Perry Mason.

The Bigamist follows the sad life of a salesman. He and his wife want to adopt a baby. But adopting a baby isn't like having your own; it requires a background check. The old man doing the background check on our salesman friend uncovers a whole double life, which is then presented to us in a long flashback. It's interesting as can be. I thought it was gripping, the whole sad story that you know it's going to be ... thanks to the title. Ida Lupino played the part of the wife in Los Angeles. His other wife was in San Francisco.

Not Wanted is about a young woman who becomes an unwed mother. It happens all the time now and it's usually OK. But in 1949, not so much. It's a very cool movie. We have a wild-eyed, yet in some sense reserved, night club piano player. I really liked his controlled histrionics at the keyboard. He and the young woman start up a thing. Too bad it wasn't coitus interruptus, or better yet abstinence, since his career, dismal to this point, means he has to go to South America. We never see him again, although he leaves something behind. Then there's the true man, a one-legged guy who definitely, heroically stumbles the extra mile to show he does actually love her. In between, there's the hospital for unwed mothers and some of the agonizing issues of adoption. Nice movie.

I was thinking, enjoying Ida Lupino as I've been, that it'd be cool to have my own TV show. Sort of like the guys on Turner Classic Movies. I could be sitting there in my easy chair. Then I realize I'm on. I perk up, go to the bookcase for a huge volume, titled after the Ida Lupino movie that I'm presenting. Of course I open the book and give a few bits of history about the film, who wrote it, etc. Then I pull out a pipe and go through all the gyrations it takes to get one lit, then I'm smoking it, and talking about Miss Lupino and some of the issues she addressed.

Ida was in a bunch of movies, way before she started directing, so this could be a show that went on for maybe close to a year. In the course of the year, I could have all sorts of cool things that I'm messing with. Like my slippers in the winter, poking at the fire, cleaning my bookcase, having my chair reupholstered, interviewing one-legged men, talking to hitchhikers, playing the piano, and sexing up young women (not on the air, of course) ... we'd just show the afterglow. Also, I'd be getting ready my passport for South America.

My recommendation to you is this: Don't wait for my show. The bastards on TV don't want me, I'm not commercial enough or something. I haven't scratched the right person's back, I don't know. I haven't slept with any producers, which is probably the actual truth. No, instead of waiting for my show, check out the list of Ida Lupino films on her Wikipedia page, then hightail it over to YouTube and check out some of these films. They're great.
Posted by dbkundalini at 8:31 PM