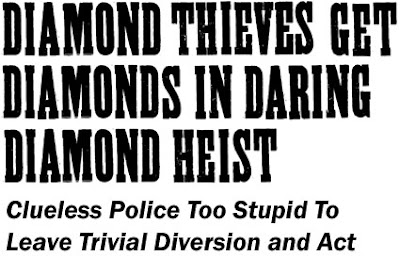 Oh boy! This was a biggie! And I'm happy to say it was all my idea! Thank God for the devious subconscious, because that had to be where it came from! I was really worried for my reputation after my plan to fix the pro wrestling match failed. So I'm thinking about that, that my ascension in the realms of the criminal glitterati was stymied, when I came up with a great idea. To stage a diamond heist! And it turned out better than I could ever imagine!

My brainchild was, Why not create a diversion? Then while a few police officers, the active patrol at that moment, checked it out, we would use what could only realistically be a 10-minute window to rob one of the local jewelry stores. I thought we would have to work fast, because the city's finest would quickly deal with the diversion and be back on patrol in no time. But I also had this crazy idea that we might get more...

I went with this psychology: A huge diversion would point to a huge crime taking place. But a small diversion might not even seem like a diversion. But it'd still be enough to keep the few guys on patrol busy, and even complacent. So it was very small, a normal sized garbage can with a few gasoline-doused rags afire in it, squarely in the middle of a large parking lot, adjoined to a defunct grocery store, absolutely no danger to anyone. With a guy watching from behind the trees on a nearby hill, telling us what's going on with a walkie-talkie app on our phones. Complete with cool bursts of static sound effects between transmissions.

He lit the rags and went to his place. Someone called the cops, then they started showing up. At that point, the rest of us were at the jewelry store. We busted in and started shooting the place up, obviously scaring the crap out of everyone. I saw my phone light up and called for quiet. "Shut up, youse guys!" I commanded. I took the walkie-talkie call, and it was amazing: It wasn't just a few officers on the scene. It looked like the entire police force was out there to investigate the little fire, including what looked like every emergency vehicle in town!

We were still working with some urgency, because Who knows?! And then -- oh no! -- I thought we were done for; I heard sirens and pressed my nose up against the glass. A string of police cars (black and white with a cherry on top) came into view, but, thank God, they were speeding by, heading west. With civilians along as well! I got a call later that confirmed it. Police headquarters had apparently emptied out, including all the secretaries and even the dispatchers! What a scene it must've been, 50-75 unnecessary personnel gathered around a (by now) smoldering garbage can!

It seemed like we had all the time in the world! We bound up the jewelry store guy, his wife, his kids, and the rest of his staff. They watched us move around the store with impunity, emptying out the place right down to the wall. Then we had an unexpected windfall: A delivery truck pulled up in back, with diamonds and other jewelry not just for that store but for every store in the area. We opened the door, bound that guy too, and started carrying his load to our own vehicles. This was diamonds in big buckets, heaping over, a huge payday! At one point I had one big bucket in one hand, another in the other, and a smaller, daintier bucket held in my teeth!

Our guy called on the walkie-talkie and said no one was leaving. It appeared they figured it was close enough to 5:00 that they might as well close out their shift socializing. Although there was some official business at the scene, with forensics carefully measuring the distance from the empty store to the garbage can. And it seemed important to dust the unburnt pieces of rags for prints.

We had everything out of the store, everything out of the truck, and time to spare. And here's where it gets good. I stepped out and saw a young kid with tattoos. I knew he had to be a delinquent, so I called him over. I said, "Do you know where the police department is?" He says, "You mean the cop shop?" I said, like Scrooge in A Christmas Carol, "Good boy, delightful boy!" I told him I'd give him 10 bucks if he'd run over and take a piss on the police chief's desk. And a hundred bucks if he really had to go! The youngster let a fart, which I took as a promise. So I was better than my word: I gave him a hundred bucks and a bucket of diamonds and sent him on his way...

We left then, headed back to the hotel, and took our time getting the loot up to our rooms. After splitting it between us, I went back to my room, took a shower and nap, watched Jeopardy, and went over to the corner for a milkshake. It wasn't till then that I saw the police cars come speeding back into town, sirens full blast, headed for the jewelry store.
Posted by dbkundalini at 5:00 PM