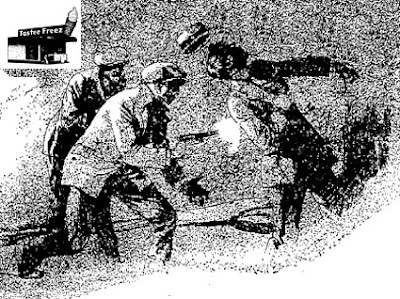 When I gave up my normal life for my present life of crime, there were certain things I was sure of. One, that I would really enjoy it, especially the thrills. Thus far I am completely convinced it was the best choice. In fact, my conviction goes so far as to proclaim, This is the only life worth living, the life of a criminal. But, two, I was also sure my reputation would take a hit, and it has.

I'm like anyone else. All this time, I've had the sense that my readers looked up to me, and even looked to me as a role model. I've gotten your emails, and have treasured the confidences you've placed with me about the hang-ups in your lives. For a while, yes, I answered them one by one, giving advice on how to overcome certain difficulties. Then when it got too much, I set it all aside, feeling the mountain of need was too much for one lone man. But I kept you in my thoughts and prayers, always wanting the best for you. And along with that, I was careful to set the best example I could, knowing that in looking up to me you would be greatly encouraged.

I should probably just admit it, now that I've turned to a life of crime, you've been a lot less willing to trust me. My blog traffic has completely fallen off. I figured you'd still be checking in just to see if I'd "returned to my senses" and rejoined normal society. The short answer to that is, I haven't! But it doesn't mean I'm not still the same basically good person somewhere down deep. Because I still am!

How is this for evidence: I'm really having a hard time killing people. It's damned tough. I've had the opportunity for probably 15 hits so far. That's all these guys think of, needing to kill an enemy for some perceived slight. The "normal" side of me says that's going way overboard. You should try to work things out. He might be your enemy today, but with patience -- and dare I say, grace, forgiveness -- you might work it out and be best of friends. But, no, that's not in their basic nature, for whatever reason. Shaken as babies?

So a couple times, frankly just to take the edge off their nerves, so I myself wouldn't be killed, I've had to go out and off a couple of guys. Their offenses were explained to me, albeit feverishly and without benefit of adequately knowing the other guy's side of the story. I've watched these guys go ballistic over getting revenge, knowing, saying to myself, their relief would be brief. Why don't you off them yourself? I'd ask. And you probably know the answer, They've got a lookout for me! But you, meaning me, could get in there and pop them, and no one would be the wiser.

It's distasteful to me to have to do it, but it's hard to quibble with the reasoning. I'm a newbie. I don't quite have the gritty, sour look of a hardened criminal yet. I might be the pizza guy. I might just be an honest neighbor out for his exercise. I have that friendly look. I wave over the hedge, "Great night, isn't it!" But then, I pull out the gun and pop 'em right in the temple, and I'm off. So I had two jobs like that. Idiots who had it coming.

The only killing I've done for myself -- and I swear there's only been one so far -- is the Ciggie who tried to scare me off from Tastee Freez the other day. I hated that roughneck son of a bitch telling me that I couldn't go to Tastee Freez! Imagine the nerve of the guy, a bonafide hoodlum if ever there was one. Well, I drove by a few times, and, guess who I see? Him, standing there with one foot on the side of the building and the other foot naturally supporting his body weight. He looked like what he precisely was, a real creep.

What I did next I know sounds coldblooded. But I didn't want him to get the jump on me. And the best way to do that is to take him completely by surprise, and kill him without the slightest mercy. I parked in the farm implements parking lot just west of there, across the street. I darted across the road to the north, then came up behind the building. It was amazing. He didn't know what hit him, just one deadly blast in the vital organs. I didn't wait to do an autopsy -- I was gone before he hit the ground! But I shall return to the scene of the crime very soon, for a refreshing sundae!

I confess these incidents not to titillate or to brag, but only to throw myself on the mercy of my readership. I'm not so bad! It's only three killings ... out of a dozen or more that I could have done by now. So you can still trust me. I'm still here for you.
Posted by dbkundalini at 7:45 PM