I Try To Fix A Pro Wrestling Match 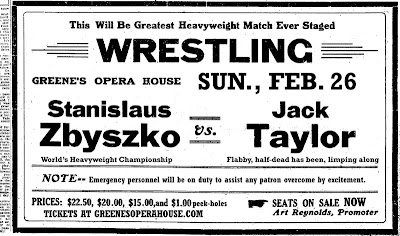 I had a bright idea that the Organization should get involved in the professional wrestling game, specifically, to fix the biggest match in this area in some time, coming up tomorrow, Polish champ Stanislaus Zbyszko vs. dried up Jack Taylor.

I told Tony -- Mr. Big -- my idea, and he was dubious we could pull it off. One, he's never heard of pro wrestling being fixed before; it's always on the up and up. Still, I had his blessing, if I could successfully arrange it. He said he'd put 50 Gs on the match with a Zbyszko fall. Because of course Zby's the overwhelming favorite.

We got ahold of Al Reynolds, the promoter. I heard him yawn on the phone, "Surrrre, come over, bring your boys, whatever..." Tony told me to take the only former pro wrestler in the Organization, Big Brute, to help out, who was also skeptical. In short, we made threats, we used the old strong arm technique, both usually effective as an opening gambit ... but not in the field of pro wrestling! Those guys would not bend!

So Tony and Brute were right. And I'm thinking, You mean to tell me pro wrestling's on the up and up? Why aren't there reports of matches in the daily news, sports journals, and almanacs? You're telling me those big garish belts are actually awarded to legitimate winners? I couldn't believe it!

I said I wanted Zbyszko and Jack Taylor to trade falls, then for Zby to take a powder in the 3rd and final fall. Geez, what money there'd be! Stanislaus is a future hall of famer, no one expects him to lose! Taylor's best days are far behind him. Why they even picked that half dead layabout, I'll never know. Not when guys like Earl Caddock and Ed "Strangler" Lewis of headlock fame were available! You tell me!

Anyway, I didn't want to take no for an answer. I pulled out my gun. Brute tried to calm me down. I went up on the ring, shot 40 shells in the mat, and said, "That could've been your head!" They weren't impressed.

I asked the wrestling boss if he had any pictures of his kids. He tossed me his wallet. I took out a big string of pictures, stuck them on a nail on the wall, and shot the shit out of them. These photographic memories of his children, once so recognizable you could pick out each one as a distinctive individual, were like New Year confetti. You couldn't tell which were girls and which boys. All traces of gender were gone, as were all traces of anything, except you could still see the original photos were in color, since the pile of resulting confetti was colorful, as confetti generally is. It didn't matter, he said, the integrity of the sport was too important.

I still had one huge ace up my sleeve. Before arriving, some of the guys had abducted some of these guys' mothers. We led them in in chains. They were crying, etc. But everyone remained very calm. The mothers were assisted into the ring, and some of the other boys brought in a full arsenal of machine guns. We were going to get a deal or the mothers would die!

But now it was the mothers' turn to plead, which turned out badly. Instead of pleading for their lives, they pleaded for their sons to keep intact their honesty. "We will gladly die, please allow us to die! Just do not stain your honor or that of professional wrestling for any reason as selfish as keeping us alive. The sport must be Number 1, it must go on! We've lived a good life. We are ready to die." They laid it on thick, as you can tell.

Meaning, we eventually let the mothers go, and gave up. I couldn't believe the sport of pro wrestling was indeed a sport, so entirely above board and incorruptible. I thought it was a sham. But every word is true. It happened just like I said...

In the end, I was philosophical about it: Into every life a little rain must fall. At least I thought that was the end. Al Reynolds and some of his bruisers grabbed us and tossed us around the ring like rag dolls, supplying us a full and vicious pummeling for good measure, their feeling on the subject, not mine.
Posted by dbkundalini at 4:07 PM