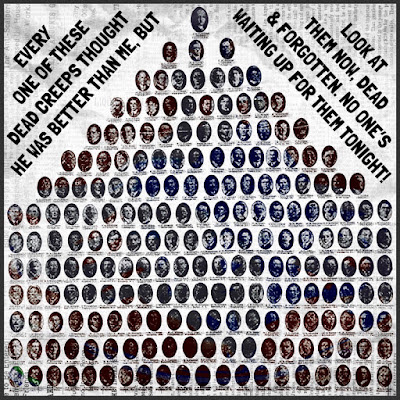 This is what the past looks like, formal pictures of guys from the neck up as far as the eye can see. Most of them being a link in the chain that goes back as far as we can imagine, the dark, the slime, the ooze, and that’s just their parents’ honeymoon. They came on the scene exactly as did we, humpa humpa, “Guess what,” Mom says to Dad. In that regard they’re no better or worse, but the same.

But Junior does his thing, climbing as high as President of the Firm! Busy making parts for machines, then as President overseeing the work, engaging salesmen, training them, getting the railroad on board for deliveries. And at the end of the day he sits back in his swivel chair and watches the smoke curling its way from the smokestack into nature’s loving arms. “This is the good life…” he thinks, then remembers, “Damn, Hilda was supposed to call the photographer to get everyone’s mugshot! Hope she did it. Everyone from me down to Buck Tinsdale mopping Warehouse Z, who said he 'reckons as how he can come up with a suit.'"

But all that's in the distant past. It's all done. We wouldn't know Buck Tinsdale from Rockefeller. And if he had a suit or not, no one really cares. I'm just scanning the picture, though, and it looks like everyone has a suit. No bib overalls spotted.

But now the only suit they have to worry about is the one the undertaker put on their lifeless body. And you know how they do that, cut the thing up the back and tuck it under your body. A simple earthquake and you'd be naked. But I guess they do pin it behind the shoulders and press the silk pillow in a little tighter.

Back to the picture: When it came time to assemble the portraits from the president down to Tinsdale, they needed to be arranged to show the pecking order, the hierarchy, without embarrassing anyone. Which was only a minor concern in those days, meant to encourage ambition and drive.

I wonder who the first 10% were to die. I could correlate obituaries with the names, but I can't quite make out the print. They seem to have been obscured somewhere along the line in the chain of custody of their memories. Perhaps out of jealousy in middle management, or later in the transmission of this data so that no one’s memory would be besmirched. I can see that happening. Like by the family of one of the guys, one of the last few to live, who bragged about him and besmirched the others.

A psychic could look at any one of these guys, especially if they weren’t obscured, and figure out their deepest secrets. But what goes on in the parts department behind the farthest stack stays there. Weird, the past has a veto over our knowledge of the future. Telling us in so many words, "You worry about you, let us worry about us. We’re dead anyway, so what do you want to know? 'Is there a literal hell?' We’re not saying, just let this suffice, bring fire extinguishers."

Wow, there wasn't a good guy in the bunch!
Posted by dbkundalini at 6:00 AM