A Merman I Should Turn To Be 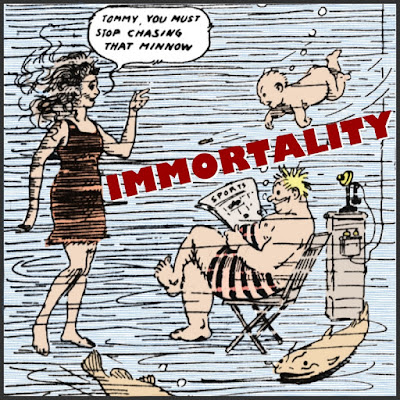 Part 29 of 31
They Found Another Body

“Tommy, you must stop chasing that minnow this very instant!” Takes me back, way back, to a time when my family tried an underwater lifestyle. It was popular a few decades ago, and was a kind of natural reaction — seems foolish now — after we first heard we are made up mostly of water. Of course we could never breathe under water, so we sucked breath from about $4,000 worth of air tanks. Think of Jimi Hendrix’s 1983 (A Merman I Should Turn to Be), about living and breathing under water; that was the last edge of the movement. When a guy famously died trying it, but he was stupid and wanted to show his "faith" by wearing cement boots in the attempt.

By comparison my own family took only baby steps in the attempt. Because we were hyper-realists even then. Yes, we might be on the cutting edge in one sense, but we had enough reserve to let someone else give the cement boots a go. So instead we opened an aquarium store and sat there studying fish, memorizing all their moves and seeing if we could discern their secret in having water for air. It actually is beautiful, all the goings on in an aquarium. But there’s a few downers. Even fish die, so they obviously haven't perfected the breathing technique either. They were floating. And they get diseases just like we do. And occasionally jump out. You’d think a fish would be smart enough not to do that. Unless they were just doing the opposite of us, trying to live out here.

The whole thing went by the wayside when a few more people drowned. The breathing wasn't working out. But the basic problem was it was just the local river, a thick dirty quagmire. Whereas water runs free in its channel most of the time, other places have big concrete blocks and lots of mud. You dive into a muddy patch with a concrete block two feet from the surface, it’s going to hurt your head. We’d be gathering upstream for dinner, and suddenly there was an empty spot at the pier. “Swim upstream and see where your brother is.” I did that and didn't find him. “Swim downstream and see where your brother is.” Off I went downstream. Then I came back and there he was, hovering lifelessly behind the concrete block. Kind of ruined the meal. My dad pushed away from the table in outrage, “Those goddamned concrete blocks! They’re ruining my appetite!”

And you can’t disagree with that. The solution turned out to be as simple as this: Stay out of the dirty river and forget the concrete blocks. And if you’re going to live underwater, do it the smart way. Put plastic over the windows of your house, have everything vacuum-sealed to not let water in and not let water out. The water being clear as a bell, no one gets lost. The air spigots worked fine, and you get so much air in the water, the breathing’s great. And it’s pretty too, the wavy patterns you see. Man, the patterns! For instance, if you were looking at one of my Mom’s “Mona Lisa” paintings -- She collected Mona Lisa prints and had them in every room -- you really saw it's true: Mona Lisa’s smile is particularly lifelike in a house full of water!

Our happy family in today’s graphic shows the quality of life we can ultimately expect when someday at long last we’re finally out of the dirty filthy air that everyone else seems to think is so good. It's not good. It’s crap compared to water. To me water's the ticket, water. The whole scene. And along with that, immorality. The whole scene's my cup of tea.
Posted by dbkundalini at 6:00 AM