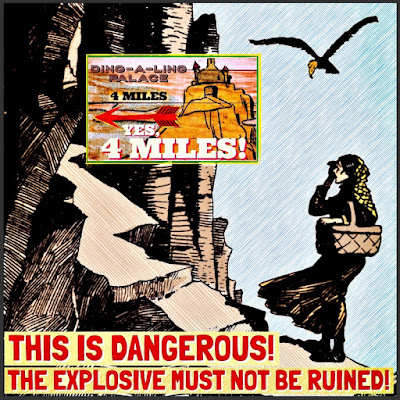 Part 20 of 31
They Found Another Body

The higher you go in mountains like that, the thicker the gravity gets. You start out at the bottom, everything’s perfectly fine. Each foot feels it’s usual weight, your shoes are comfortable. You feel you can survive, and if business is good at Acme Explosives, thrive.

An order came in for a standard explosive, about yea big, close to a breadbox but not quite, just perfect for offing underlings, hangers-on, aides-de-camp, ladies in waiting, and even your own mother if she gets lippy. This isn’t how I think. My mother never got lippy, but naturally had she the shopkeepers would've had something for me.

But this order had to go to the Hall of the Ding-a-Ling Mountain King, pretty high. Up there. You start walking those steep trails and anything can happen. One slip and you’re— I don’t even want to think of it. The trails are carved according to a standard, right? If the trail weren’t passable, could it even be called a trail? And yet in a mountain there’s going to be many incongruities at the tiny level and even bigger. Which is why they say if the mountain won’t come to Mohammad, Mohammad has to go to it, and that tradition’s continued uninterrupted since the last molehill formed by continental drift.

Acme Explosives. Acme’s had a pretty good safety record. It’s a Mom and Pop place that uses the skills of mountain dwarfs, townspeople, and delivery girls. They haven’t had 40 accidents in the last year. They've got it down to a decent science, where they can honestly claim, “If Acme doesn’t get you the bomb the first time, we try again.” That’s a great policy, and if you stick to it, [BOOM! A dwarf just lost his hand] you’ll be in business as long as life and limbs hold out.

OK, the Ding-a-Ling Mountain King, whose insanity has a little bit to do with this episode, put in his order, and then it was up to Acme to get it there. This was before drones were perfected, although, see that bird? That’s a prototype drone almost mocking the delivery girl (“Someday I’ll have your job!), but at that stage of development the drones could barely carry an explosion the size of a walnut without killing people.

So here she comes — Amber, in every way better than a drone but for the gift of flight — with a major explosive in her granny pack. Just a few more steps, then around this particular crest, then down the other side slightly, then back up, the craggiest most dangerous place, lots of loose gravel, loose rocks, places non-drone birds have pooped and made slick, etc. It's called Danger Pass.

She finally made it through Danger Pass and was just about to come to the Mountain King’s gate when the prototype drone went wacky and began diving at her, making things very uncomfortable. Three steps forward, ten steps back. The drone backed her up something fierce. You ever known someone who backs their work obsessively up on a computer? It was like that. She was so backed up even Metamucil wouldn’t help.

Finally — O God, turn back the hands of time that this might never have happened! — in desperation, Amber ran and her foot slipped, her shoe broke down, the heel went askew, a nail went in her heel and at the same time she tripped, landing full force on the granny pack. The gravity couldn’t have been thicker, Bigfoot-belly thick. She lay there sweating for a few seconds thinking, “I’m going to be all right—-“ when she was gone! The bomb went off and blew half the mountain to smithereens, the drone prototype to kingdom come, and Amber to memories pressed between the pages of my mind. There was nothing left. If you didn’t know her by then, you will never never never know her now.

But enough sadness, we’re looking on the bright side, a brand new job opening at Acme.
Posted by dbkundalini at 6:00 AM