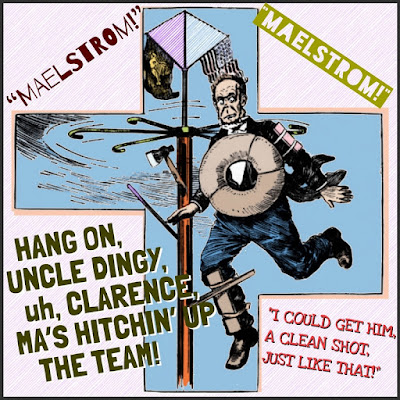 Part 9 of 31
They Found Another Body

This was a relative of mine, Uncle Clarence aka Uncle Dingy, who actually died before I was born. Once upon a time something happened and Dingy went a little rancid, wormy in the head. These days it might’ve been called a mental breakdown, because he was definitely under the weather where it counted. He had several close calls with death. He saw more than a man of his limited mental capabilities should see. Involving someone else's wife, likely from the neck down in full display. And he ended up dying of natural causes, some say murder. There was a prolonged vigil, rattling the cages and storming heaven's gate but it didn’t do any good.

I’m kind of glad it all went down before I was born. I have the space to stand back semi-detached and judge from a distance: “What happened to you, Dingy, that you couldn’t make it to old age like the rest of the brood? Did you forget every teaching they taught you, not to get involved in the affairs of people of such low character, with more on their mind than citizenship, patriotism, and doing good? You know the family, right, Dingy? We wisely stand back when the world’s going to hell in a hand-basket. Where others wilt in the face of temptation, we stand tall. So what happened to you? Was she that hot?

Ouch, that might burn, I got a little too close to the truth, which I wasn’t going to touch. But there was a jealous husband, jealous to the point of taking it out on Dingy, it being a firearm, a pistol to be precise, waving it about, about to fire it in that room of sin, with red wallpaper and nude paintings, the works, after backing Dingy to the headboard, who strained his neck something fierce when there was nowhere else to crawl. Bang!

His last word was “Maelstrom! Maelstrom!” I’ve heard of that, but I had to look it up to get a fuller understanding. The dictionary says, “A powerful whirlpool in the sea or a river.” And “a situation or state of confused movement or violent turmoil.” My first thought is that Dingy was out of his mind and randomly remembering something maelstromesque. But I ran it by a friend and he said Dingy likely was likening his experience with the woman and her jilted lover/murderer to a maelstrom, something he wished would’ve never happened, and if he had it to do over, he wouldn’t have. Or would've taken her to a different town.

That’s pretty smart reflection. ‘I did something, I’m sorry I did, and if I could do it over again, I wouldn’t have, or would've gone farther.’ But then he was in a maelstrom, a whirlpool of consequences, sucked down, dragged inexorably toward a fitful though regrettable conclusion, death.

What could he have said to call off the dogs? If a word like maelstrom didn’t call them off, probably nothing would have. “I’m sorry, it was a one-time thing, nothing we’ll repeat, I’ll make it up to you somehow…” “Make it up to me, huh? There’s no unsullying her good name and honor!” Bang, bang!
Posted by dbkundalini at 6:00 AM