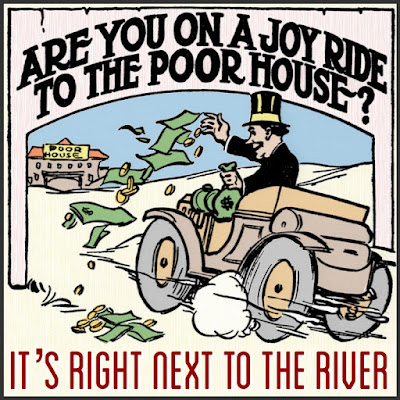 Part 10 of 31
They Found Another Body

You know how I said my plumber also gives me legal advice he learned in night school? Well, the same guy rounds out his careers by sharing financial planning with me. I turned to him some years back when I was very embarrassed and, frankly, depressed. Down to several potatoes manifesting strange spots and softness and needing dog food, everything was so bad I had to take on a paper route. I seriously thought I'd reached the end of my rope. But whereas most people at that point let go the rope, I hung on for dear life and was able to cinch it up, a loop here, a loop there, and pretty soon I had a makeshift chair as I hung. My plumber, Dick, was pleased, and ever since has witnessed my turnaround with other potential clients. "If this guy did it, anyone can!"

To this day, Dick frequently gets handsome rewards from my survival. But, Dick or no Dick, I’ve always had a sense about me that life is worth living even if I should briefly descend to the absolute pits. Fortunately, my definition of “absolute pits” has never been set in stone or I surely would’ve been gone by now. But instead I’ve learned a certain tolerance for complete despair, although, to be frank, despair's never complete, just as it's never enjoyable. Still, I can honestly say I’ve never yet gone a full year without food or shelter. So things could be worse.

And that’s why every now and then I give a little something extra to Dick for his financial advice. A lot of his advice is right in the middle of the target, common sense: You never want to spend your money so much that you can't climb out of the morass. And you don't want to leave money lying around as a target for thieves. Instead, go for the median, a kind of common sense middle, not too much, not too little. If you can keep your bills tamped down, not adding unnecessary things — the common sense definition of that being something you’ve lived without till now — you’ll have more money for later. And if you’ve been stupid in the past (on this point I haven't), you pay off the sharks who continually circle.

Dick has some points about sharks that are worthwhile. Don’t get involved with them in the first place! And if you ever have, try to get out as soon as you can. Get smart. Try a disguise. Disguises aren’t just for Halloween, but can be a way of life. Next, remember, every road leads somewhere. If you don’t tell anyone where you’re going and if you just disappear, always have the discipline never to leave clues where you are; that's to your advantage. It's something to consider carefully though. Because at the very least you still have to deal with the government, welfare, Social Security, etc., which leaves tracks. My solution to you, a strictly amateur bit of advice, is pray that fairies exist, because any time you can sock away three wishes with very few strings -- giving up your firstborn, etc. -- it's good insurance.

But, on the other hand, say you've really screwed up. You're cornered and there's no moves left. Even then you have one final possible residence. And that's the Poor House. Which in my experience stands for the last place on earth when there's nothing left. Your life is one of total embarrassment, but you still hope to live. (It might not actually be the last place; monasteries still exist.) But the problem with the Poor House is it’s only a label that “stands" for the last ditch place, it doesn't seem to be a physical place.

And, unfortunately, when people tell you where it is, and you’re optimistic you might find it, the directions seem to always route you somewhere near the river. Definitely time for professional help. Or a monastery. There might be a divine plan, giving you the chance to disappear into the loving arms of a monastery where you are so good they literally beatify you and you're St. Loser, the guy who gave up everything and lost the rest. You have nearly nothing and you're super happy, and now ... you inspire others, sometimes in a positive way, sometimes -- how regretful! -- negatively.
Posted by dbkundalini at 6:00 AM