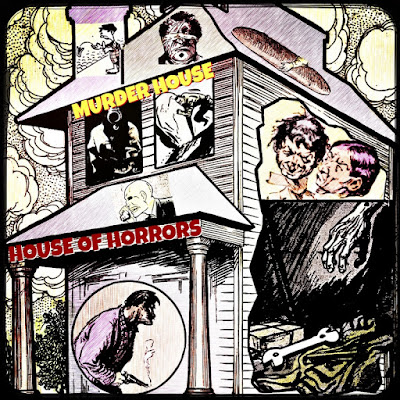 Part 25 of 31
They Found Another Body

Now that I live in the Big City — quite a change for a small town boy — I realize there’s more Murder Houses and Houses of Horror than you can throw a machete at. A far cry from some of the other places I've lived, tiny towns and midsize cities, when occasionally someone dresses up their house in a scary way for Halloween. Very spooky! That was fun, but these guys are playing for keeps. If they're even in there. Sometimes you don't know.

It appears some of them are playing for keeps. They're in the news a few times a week. According to several victims — some of them with only mute testimony — they wish they hadn’t gone in or even become acquainted with the residents. I myself do NOT go in, not that I know where any really dangerous places are in particular. I ride my bike around about a six block radius and otherwise keep to myself. Would I like to go in? Sure, I have an exploring nature. But going in doesn't seem wise, and, anyway, there's nothing I need.

The way to do it, naturally, would be to stand outside behind a tree and listen. Keep your eyes and ears open for anything going on. And simply wait them out. If they’re in there, being as quiet as they can be, just hoping you come in, they can’t keep it up forever. Because everyone moves sometime. And you’re outside, watching and listening. There's going to be some noise.

But it could be a stalemate, if you don’t go in and they don’t make a noise. One way to flush them out would be to heave bricks toward the windows. The glass is usually broken anyway. A brick comes through the window, if someone’s in there, they’re going to react. As for you, you’re in the best spot, because as soon as they react -- the rat-a-tat of machine guns -- you’re going to fly!

OK, let’s advance a little bit. You're outside, and you're satisfied there’s no danger. Even though the visitor’s guide — or the picture in your head — has a gun-toting murderer at the front door, a veiny claw hand reaching for the world’s most dangerous wrench, and one story up there’s two gnarly boys either joined at the hip or hooked together in some other way, forever at odds. Then the front room upstairs, there's a gun pointing at you and a man rolling a boulder down a cliff. Even the attic isn’t safe. A man with a bandaged head, bleeding to death, a boy throwing a banana peel on the road, and the world’s biggest bagel or foot-long bun toted under someone’s arm. This could be a game like Mousetrap, with all the moving pieces!

And you're still out there. Finally you decide, No one’s made a peep. So you go to the front door and rattle the handle. That’ll flush ‘em out. Still not a peep. You try the door, everything’s fine as it opens. You walk in, it’s all OK. When suddenly the door slams, and the procession of people already described, one by one, attacks you! You’re virtually dead, when out steps the boy with the banana peel and stuffs it up your nose, cutting off your breath, and the arm with the bun finishes you off, pounding, pounding, rancorous pounding with a piece of bread so hard he could pound nails all day and it'd never soften!

Think I'll stay home at least today.
Posted by dbkundalini at 6:00 AM