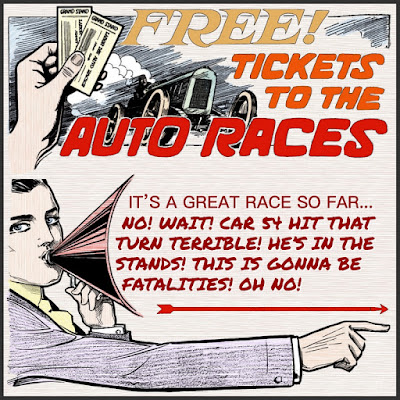 Part 7 of 31
The Found Another Body

I heard one day that there hasn’t been a racing fatality in so long, years, that they're shaking their fist at heaven, daring the Almighty to "Bring it on, Big Fella!" A disgusting sentiment. But because the safety features are so great, all the latest designs, and have stood the test of time, nothing can possibly go wrong. I’m glad that's the case in a way although of course most of us know that a little real life danger puts the edge in things. If nothing can ever go wrong — as much as we hope for people’s survival — it’s too cut and dried.

That’s not how it used to be, back when a man was a man and the Future Corpses of America always had their rooting section at the races. I used to go to the races as a kid and we only got popcorn money if someone got killed. But to be fair to our parents, we also got money for nickel candy if there was a major pileup and no one perished. And there were other levels of reward, like if the winner suddenly fell dead of a non-race-related problem, aneurysm, bleeding hickey, or lung cancer. One guy died of all three once and I spent the next year on my own in Hawaii, meeting beach girls and getting plenty of leis.

Those were great days, like the wild west of family outings. We went with other folks, relatives, and had a blast. My uncle and dad made sure we got out of there fast, pretending to be traffic guys. We scooted right out. There might be a 10-car pileup behind us, and, yes, an occasional fatality (never involving bleeding hickeys), but we got home quicker. The answer to your question is NO, we didn’t get anything if other motorists died. Maybe our ass kicked if we didn’t warn dad that someone was stuck under the tires and messing up his gas mileage.

Anyway, back to the races. There were always some professional drivers, and professional wanna-bes, high school kids, their dads, uncles, etc., always guys, and most of them had something to prove about their masculinity. I know if I were a high school kid driving I wouldn’t want my friends at school dumping on me because I had a light foot on the gas. You have to put your foot on the gas and go for every advantage. If they have the flag out, “Well, I didn’t see it till a couple minutes after!”

I’m glad I survived. The races I’m talking about had a crew that patched up the stands nearly every week. One side, the north end, was constantly collapsed, since that was the hairpin turn and you weren’t anybody till you skidded out and wrecked there. We definitely vied for seats near that section, because it does give you some extra bragging rights if the cars sail over you. That happened one night and the guy was crossing himself religiously as he sailed over. And good thing he did too, because he took out the women’s outhouse. The ladies would’ve skinned him alive had he survived.

Even now as I remember all these things — I’m hungry — wishing I had some of the popcorn we used to get. And the satisfaction of earning it the old fashioned way, one crazy accident after another.
Posted by dbkundalini at 6:00 AM