So Many Disgusting Hands 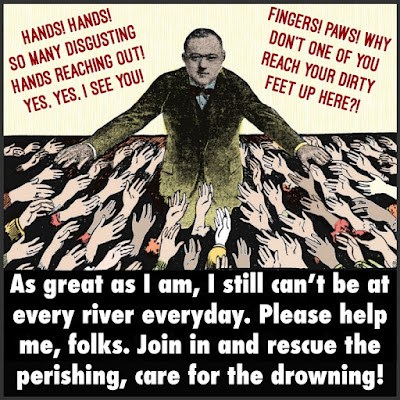 Part 16 of 31
They Found Another Body

We know deaths come in more stripes than drownings. Drownings (or being brutally murdered and tossed in the river where someone ultimately notices you) are just the theme of the month. Because it’s what we’re forever hearing on the news, “They found another body in the river today.” It’s literally never, “We found another accident victim on the interstate," because those are always obviously there, never needing to be found.

Have I ever gone to the river looking for bodies? Yes, I have. But only halfheartedly because I'm the world's worst pessimist. Not that I want to find anyone, but I figure I'm as good as anyone, why shouldn't I be Johnny on the spot when someone floats by? Then there's the quandary, What would I do then? By the time I go for help and return, it'll be way downstream and I'll look like a liar. Or, duh, I could use my phone. But under that kind of pressure, I'd be a basket case, potentially. "Uh, is this the sheriff's office? You're not going to believe this, I hardly believe it myself..." "Get to it," they interrupt, "State your business." I'm like, Wow, I wasn't expecting rudeness, and hang up and refuse to answer it when they call back.

Before everyone had phones I used to live in a town with a river just outside of town, and went there whenever I could. Thing is I never found anyone there either. But we used to go there once in a while when the water was high and throw bottles with notes in it in. Never heard back from anyone either, so my life hasn't exactly been charmed. That'd be another way to call the sheriff. If you throw someone in the river, there's no statute of limitations. And even it the note takes 50 years to reach them, the sheriff could still show up. But in 50 years I'll easily be dead, and they, stumbling along, could find my skeleton washed up in a beaver hole. No one I knew before.

In short, we never found a body.

Here, though, since I’ve pretty much become the spokesman for the dead washing up in rivers, keeping track of them and encouraging them to come forward, that’s what I’m known for now. I wasn’t so bold when I started this. And now this weird public mantle's been bestowed on me. I’m really not worthy. And when I say that, it’s not false modesty. Not only do I not deserve this, I’m pretty sure I don’t want it. I just want to write my corny articles and find my way back to obscurity.

And yet it’s come to this. Everyone who’s ever lost anyone, presumably now they have a real glimmer of hope, however small, that someone, anyone, I, might help bring their loved ones home. So they’re writing, calling, stopping me on the street, the police sometimes coming to pick me up, not because I’m in any trouble, but because an assembly is outside the station clamoring to hear from me. All because I wrote a few articles online. I hate it, yes, but you know, if they ever start bringing me pizzas, I might embrace it.

Still, germophobia betrays me. I don’t want to touch people. I don’t want people touching me. And yet they’re reaching out, like they really think I have a clue where their loved ones are buried or are floating. I don’t have any idea whatsoever! This is false hope! Which is better than no hope at all, although it’s that too. Still, I’m a living spokesman, so they keep reaching, one dirty hand, two dirty hands, three dirty hands, full of germs! Is there a beaver hole in the house? Asking for a friend.

But, really, that’s just what I need, one of these people reaching their dirty feet up here. Better not. Whoever reaches their dirty feet up here, I’ll purposely put your loved one’s name in the circular file and not look for him or her ever again! Even if I see them, I’ll let them float on by. All the way to Texas or Pakistan, wherever the river comes out first.
Posted by dbkundalini at 6:00 AM