The Blind Men & The Elephant 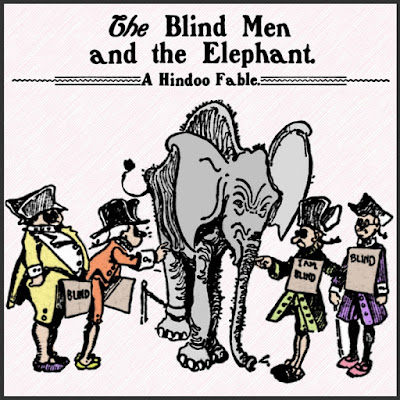 Someone came upon a cluster of lost blind Hindoos, and knowing that blind Hindoos are usually looking for an elephant to feel up, led them on, “His pen is this way and, believe me, this elephant, he means business!”

They thought it over, "He 'means business,' that can only mean personal relationships up the wazoo, unless the colloquialisms have changed since junior high PE. But blind as we are, we must feel our way through whatever challenges present themselves. And maybe we'll mitigate some of the bodily thrusting and live through the experience."

OK, so as not to make a short story any longer than it has to be, they made their way into the pen, reaching out, feeling here and there. The first said, “Wait, spread out! Let’s take it one at a time, and if there’s any survivors, long life to you.”

He approached the elephant and got right down to business but was a little too frisky, making him the first victim to get kicked to death, just like that. The elephant’s feet came up like a World Series outfielder running for the fence, with each blow landing harder than the last just to make his point. The blind man was dead.

The second felt around very gingerly, giving proper attention to the trunk, then made his way gradually toward the business. But he mistakenly thought he’d felt two different elephants’ business. The comparison did him in. “The first elephant was properly hung, this one’s a living embarrassment!’ There being but the one elephant, he showed he was one of a kind, a true stud, and kicked the blind man to death.

The fourth “blind man,” having feigned blindness for years for sympathy and free food, as well as the constant ability blind Hindoo men have to couple with well-hung elephants, knew which end was which and which label was appropriate to which organ. He stayed with the elephant through the long day, then the long night. Because it wasn't till morning that the townsmen came with the elephant's daily gift of peanuts. The “blind” man quickly reached out and ate the offering. The elephant immediately kicked the “blind” man to death, thinking, “You guys can feel up my dick all day long, but don’t mess with my nuts!”
Posted by dbkundalini at 6:00 AM