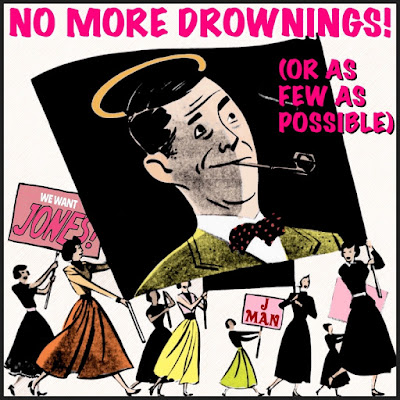 Let’s go back to where it started, with people getting sick and tired of it, fed up with bodies being found in the river. Then it so happened that a guy whose actual name was Jones was a victim. Whether it was by foul play or his own personal date with destiny or the Angel of Death, Jones’ body was found in the river.

One thing seems certain: Jones never had an enemy in his life, unless we’re talking about the normal scuffles and fights we get into in school when we’re very young. In this case they did go back and talk to all his playground enemies and most of them could barely remember him and the ones who could remember him had watertight alibis. "I live in the other hemisphere of the world" was one of the best alibis, but maybe a little too convenient, but they let him go since he's lived there since 1959.

Closer to home, friends and relatives said Jones was generally a happy man. Being average in every way, how could he not be? He had the standard wife, the standard 2.4 children, a house with a roof, a job that was good enough, cars, trucks, TVs, etc., basically everything you need to make life a decent thing to behold, and something you’re glad to get up everyday to face again. Most of us wake up hoping our life will be as good as it was yesterday or better. And whereas sometimes we wake up and it isn’t as good or better, we keep going. Jones’ story was like that, but according to the reports he hadn't seen a negative thing in years, not even ordinary potholes in the road. We've had hail and his shingles are fine.

There was literally no reason Jones shouldn’t be with us still. Could it have been a fishing accident? He didn’t fish. Did he owe someone money? No more so than the usual guy whose credit is impeccable. You pay your bills and it’s not fun, but if it’s too much you cut something, one of the streaming services, the grandkids’ ballet lessons, your wife’s towel budget. Think of the cuts we could all be making. I watched a movie on one of my streaming services that I didn’t enjoy. If that’s the kind of movies they’re putting out these days, bare bosoms and hanky-panky, to heck with it!

Well, how ever it happened, it happened. Jones was found in the river. No apparent foul play, the water wasn’t any higher that day than anywhere else and it’d been a dry summer. And we covered his childhood acquaintances; they all live in another hemisphere, another state, or are above suspicion.

Again, there isn’t a single legitimate reason for Jones to be dead in the river. And that’s why the outpouring of sentiment has been 100% in his favor. The crowds are having fits, they're outraged as well they should be. And something’s got to be done, short of diverting the river, because we need the water. The mayor threw up his hands. The police shrugged their shoulders, saying, “Don’t blame us!” No, no one’s blaming anyone. We just have to be more vigilant. And keep our eyes wide open. Because if someone throwing our citizens in the river for no reason, we consider it our business to find out why. And once we’ve found out why, we’ll put a stop to it. And do what it takes to bring justice to Jones.

Think about it, fellow citizen, if it was Jones this time, next time it could be any one of us. Perhaps even you.
Posted by dbkundalini at 6:00 AM