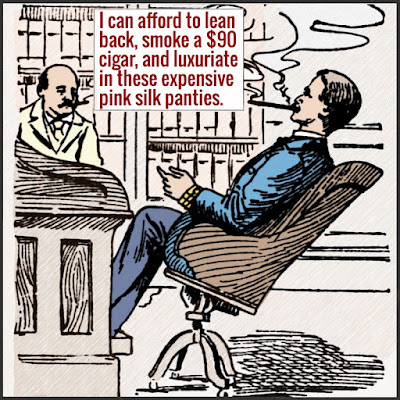 Part 8 of 31
They Found Another Body

We all know death is out there, but it seems like there's a definite point in our lives when we consciously realize that, yes, we are going to die. "This robe of flesh I'll drop and rise..." It doesn't mean you have to dwell on it. Maybe a nodding acquaintance is enough, with each day (thump, thump, thump) being a day closer. And we’ve certainly heard enough people having premonitions and suddenly, [throat-cutting noise]. Sometimes your doctor just hasn't got enough time to search for a spleen donor.

Another thing that comes into play is how we interact with our fate. So, realizing and interacting, that’s the ticket. But how do we interact? We have the classic (negative) interaction in the young whippersnapper above. We’ll call him Dizzy. Even Dizzy’s workmate allows himself a quick look of disbelief at his tone. Note to self: “Please allow me to be ‘umble. Being ‘umble is always better. ‘Cause if you’re not ‘umble you’re in for a t'mble!” And I’m not talking a t'umble in bed with Minnie La Aha or Chesty La Morgan, the two extremes of varying sizes. But in the old grave, Old Sunken Acres Cemetery down in the valley.

OK, Dizzy has a whole vibe of taking things for granted, being vain in his assumptions and surmises, and a self-image ripe for a fall, the opposite of humility, being entirely thoughtless as to the ways Life can put the clamp on your privates and make you scream “Bloody Sister,” who had problems of her own. In this regard, it would be fatal for me to say ‘I’ve got it going on’ in this regard. Surely the skies would immediately open and a battalion of battle angels similar to what they saw on D-Day would rush upon me. And I’d be dead before I finished this post. That’d be a tragedy! I’d rather live at least till this is posted. Then if everyone hears I was subsequently vain about it, OK, sure, bring on the angels! But I will remain ‘umble.

What is Dizzy saying? He’s unconsciously summing up his life as he sits there. He’s worked for the firm long enough to be a recognized success. He’s been at it and blessed enough to be able to look back on a long career of success and now he's in the position to sum it up. If I were the other guy I would’ve thrown my dress over my head like Scrooge's maid. This man’s batty! I must get out of here! Then I would’ve counseled him, look for a good family-owned funeral home…

“I can afford to lean back…” Right there you know Fate’s cause of death. … “and having leaned back, smoke a $90 cigar…” Waste not, want not… “and luxuriate in these expensive pink silk panties.” I have no objection to that, what else are silk panties for but comfort and kink? But when he does… [O! the mountains are tumbling! the ocean's seething! the rest of me's surging! Judgment's in the air, we have a new body to find, as foolish Dizzy leans back and rubs his thigh (the silk panties were actually bloomers), and falls back, breaking his neck and crushing his head, legitimately dying a horrible, terrible, not so good death, and at breakneck speed.
Posted by dbkundalini at 6:00 AM